How did it feel to be Bret Baier Monday on the network that called Arizona early on election night 2020, pioneering the narrative that an unlikely Joe Biden was headed for the White House?

[“It was a bold call,” gushed NPR on Nov. 19, 2020. “It opened up a wider path for Biden to win the presidency after a night that began with a lot of bad news for the former vice president.”] 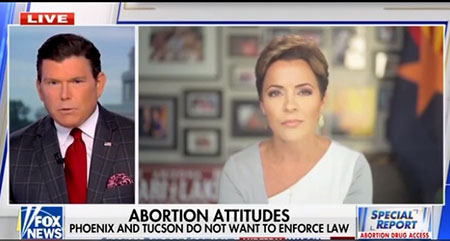 It was also a call that permanently disillusioned millions of former fans of Fox News.

In a June 27 interview on Baier’s program, Arizona Republican gubernatorial candidate Kari Lake noted that Joe Biden is an “illegitimate president” and that fraud in the 2020 election was a primary issue for Arizona’s voters.

Former President Donald Trump noted in a Truth Social post: “Arizona Gubernatorial Candidate Kari Lake was absolutely fantastic in her interview with a very unfair Bret Baier on Fox News. She absolutely destroyed him on the subject of the 2020 Presidential Election Fraud and ‘Irregularities.’ It is a MUST WATCH, she will never be invited back, and he wanted to get off that subject as quickly as possible — had no answers. Kari is the kind of tough minded and smart person our Country needs if we are ever going to be great again!”

After Baier asked what the important issues of the day are for Arizona voters, Lake responded:

“We’ve got a couple of important issues. We have a wide-open border. We have fentanyl pouring in. We have the cartels with operational control. But that wouldn’t be happening if we would have fair, honest elections. And we had a fraudulent election, a corrupt election. And we have an illegitimate president sitting in the White House. And because of that, our border is wide open. Five and a half tons of fentanyl was confiscated last year – enough to kill over 2 billion people. So weapons of mass destruction. And that’s why we’re going to secure that border starting on day one. After I take my hand off the Bible. We are going to issue a declaration of invasion. We’re going to finish President Trump’s wall. And we’re going to send our Army National Guard to the border and stop people from coming across. You know, you’ve been down there so many times, and people just pour in, and they’ve got a smile on their face. Because with Joe Biden, they feel they’re going to stay here forever. And when I’m Governor, they’re going back.”

A stunned Baier attempted to save face by claiming that no court cases had proven fraud and that some Republicans have even stated there was no evidence of widespread fraud in the 2020 election.

Lake wasn’t having it. She cited the “740,000 ballots that have no chain of custody and cannot be authenticated and they should not have been counted.” Lake added that there were “34,000 ballots that were counted two, three, and four times. People who moved who still voted in our election. There’s a mountain of evidence and I wish that the corporate media would start covering it instead of putting their heads in the sand and acting like it didn’t happen.”

Conservative commentator and “2000 Mules” director Dinesh D’Souza tweeted: “Kari Lake’s decimation of pompous Brett Baier is precisely why Fox has banned any host from mentioning #2000Mules. Fox wants to gag the hosts that want to discuss the movie while it cannot risk the others being exposed as babbling idiots in the way that Baier was today.”

After Lake had destroyed the tired 2020 election narrative Baier was sticking to, the Fox News personality quickly tried to shift the interview to drag queens, citing of all things a Washington Post article claiming that Lake was somehow cozy with drag queens despite her claimed conservative credentials.

The story originated with a drag queen who claimed that she had performed for Lake at her home. The drag queen identified himself as Rick Stevens, who performs under the name “Barbra Seville.”

The accusations lack any concrete evidence, but that didn’t stop Baier.

Lake responded: “I am really shocked. I am actually appalled that FOX News would take a defamatory story like that, and we are pursuing legal action against this drag queen. I am appalled you would bring that up when you have not talked about our stolen election. You failed to talk about that… I am really disappointed in Fox. I thought you were better than CNN.”