Donald Trump predicted that if Joe Biden got into the White House “the stock market will crash.” Was he wrong?

U.S. investors have lost $7.6 trillion since Biden was installed in office. Gallup reports that 58% of Americans own shares, either personally or with their spouse. 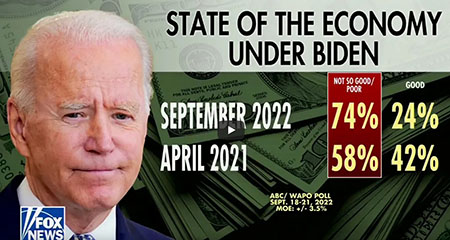 What Team Biden’s economic policies have wrought is the greatest loss of household wealth in U.S. history, analysts say.

Biden’s handlers sent him out to declare the following: “The stock market doesn’t necessarily reflect the state of the economy, as you well know. And the economy is still strong.”

Maybe in Team Biden’s alternate universe. But reality for almost everyone else is that “the economy shrank during the past two quarters, the housing market is in freefall and an inverted yield curve is flashing red,” Fox News’s Liz Peek noted.

As a result of falling stock prices, America’s wealth dropped by a record $6.1 trillion in the second quarter of 2022.

Peek continued: “Retirees invested in stocks are struggling to maintain their standard of living as inflation drives the cost of everything higher and their nest eggs shrink.

“Savers who have put their money into IRAs or other plans and invested in stocks see their portfolios dwindle. Pension plans are also losing ground; companies providing retirement benefits will have to increase their contributions, with less money left over for pay hikes or new hires.”

The Wall Street Journal noted that public pension funds have also taken a hit from the stock market sell-off: “Public pensions reported returning a median minus 7.9% for the fiscal year ended June 30, their worst losses since 2009, according to data from Wilshire Trust Universe Comparison Service…”

Trump was right! He predicted that the stock market would tank under Biden. pic.twitter.com/yIYSzvtU9L