A compilation of death threats on Twitter against President Donald Trump shows that 179 threats against the president’s life remain on the social media platform “without consequences,” a report said. 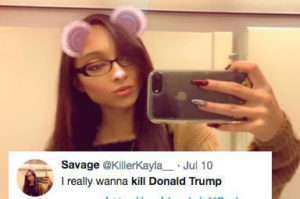 “The threats range from simple commands for others to kill Trump, to stated desires to kill President Trump, to more detailed fantasies and plans to kill the commander in chief,” Big League Politics reported on Oct. 29.

One of the tweets reads as follows: “someone go kill Donald Trump he’s currently on 5th ave.”

Another says: “What if I drop out of college and became a trained assassin so I could kill Donald Trump.”

Sometimes multiple accounts offer encouragement like “take one for the team,” the report said.

Meanwhile the small social media platform Gab, that had been used by alleged shooter Robert Gregory Bowers in the horrific Pittsburgh synagogue incident, has been suspended by its Internet host.

Gab has spent the past 48 hours proudly working with the DOJ and FBI to bring justice to an alleged terrorist. Because of the data we provided, they now have plenty of evidence for their case. In the midst of this Gab has been no-platformed by essential internet infrastructure providers at every level. We are the most censored, smeared, and no-platformed startup in history, which means we are a threat to the media and to the Silicon Valley Oligarchy.

You have all just made Gab a nationally recognized brand as the home of free speech online at a time when Silicon Valley is stifling political speech they disagree with to interfere in a US election.

The internet is not reality. TV is not reality. 80% of normal everyday people agree with Gab and support free expression and liberty. The online outrage mob and mainstream media spin machine are the minority opinion. People are waking up, so please keep pointing the finger at a social network instead of pointing the finger at the alleged shooter who holds sole responsibility for his actions.

You can’t stop an idea.

As we transition to a new hosting provider Gab will be inaccessible for a period of time. We are working around the clock to get Gab.com back online. Thank you and remember to speak freely.

According to Twitter rules: “You may not make specific threats of violence or wish for the serious physical harm, death, or disease of an individual or group of people.”

A list of the 179 threats against Trump are posted under the trending #DocumentTheLeft hashtag.