Still growing: List of everyone and everything Hillary Clinton blames for her election loss

The laundry list of people and things that Hillary Clinton says cost her the 2016 election continues to grow with every appearance she makes.

The Democratic National Committee (DNC) is the latest to go on the list along with an “endless set of people and groups” Clinton blames for her defeat, including Facebook, suburban women, former FBI Director James Comey, Russia, misogynists and The New York Times to name a few. 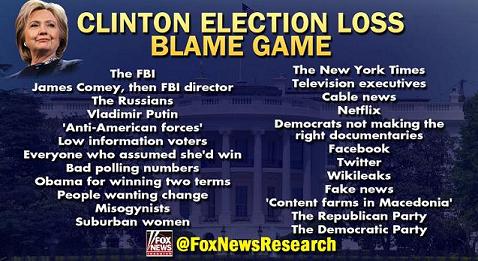 Speaking at the annual Code Conference in California on May 31, Clinton said that when she won the Democratic nomination she “inherited nothing” from the DNC.

“I mean it was bankrupt, it was on the verge of insolvency, its data was mediocre to poor, nonexistent, wrong. I had to inject money into it,” Clinton said.

Former DNC Data Director Andrew Therriault tweeted that Clinton’s accusations were BS and told the DNC data team “I hope you understand the good you did despite that nonsense. Private mode be damned, this is too important,” he added. “I’m not willing to let my people be thrown under the bus without a fight.”

As Liberty Blitzkrieg’s Mike Krieger noted, even Clinton’s aides are “sick of her incessant BS.”

“Personally, I’m in the camp that thinks a large percentage of Trump voters didn’t support him out of personal affinity, but rather as a means to ensure that Hillary Clinton would finally shut-up and go away forever,” Kreiger wrote. “That is not happening.

“I issued a code red warning last month highlighting that I thought Hillary Clinton’s ongoing spotlight-hogging, blame deflecting, Russia fear-mongering tour is driven by a remnant burning desire to be president and the delusional dream that it could still happen.”

Some of her aides are even publicly calling Clinton out for her “blame everyone but me” tour.

Long-time Hillary aide Patti Solis Doyle tweeted: “I love @HillaryClinton but I’m tired of hearing who/what she blames 4 loss. Want 2 hear how Ds can win in 2018, 2020 & beyond. Time 2 move on.”

Bloomberg said he thought Democrats didn’t have an effective enough message to win the 2016 election and could repeat that mistake in 2020.

He said Democrats are still looking for issues and messages.

Washington observers are waiting for her next appearance to see who or what Hillary Clinton will add to the list.