Popping up over the weekend in Washington, D.C. were posters in the style of Soviet-era propaganda which mocked Joe Biden and his Covid czar Dr. Anthony Fauci. 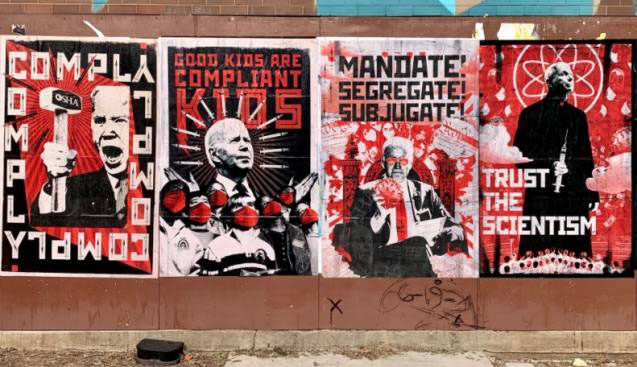 One poster showed an angry Biden holding a hammer labeled OSHA (Occupational Safety and Health Administration) and with the word “COMPLY” serving as a border. Another showed Biden portrayed as a saint surrounded by a halo of vaccines. The poster states, “Good kids are compliant kids” as children look up at the president.

“Mandate! Segregate! Subjugate!” is written at the top of another poster featuring Biden holding a sphere of the coronavirus. The fourth poster shows Fauci dressed in priest’s garb, with an atom halo holding a giant vaccine as pills and money rain behind him, and the caption is “Trust the scientism.”

Leigh Wolf, a conservative communications professional, tweeted photos of the four posters: “Somebody put up this incredible street art in DC over night,” he said. “Knowing DC it’ll be ripped down within hours. All must comply!”

In many authoritarian countries, art which is not approved by the state is not allowed. So, not surprisingly, the D.C. posters as Wolf had predicted were torn down soon after being put up.

About ten minutes after tweeting the photos, Wolf followed up with a video: “ANNND some lady is already out here ripping down the ‘dangerous propaganda.’ ”

Wolf said he asked the woman in the video ripping up the posters why she was doing it: “It’s a public health concern,” she told him. “I mean, it’s just art,” Wolf replied. “It is dangerous. Propaganda is a tool,” she said, adding, “this is bulls***.”

Somebody put up this incredible street art in DC over night.

Knowing DC it’ll be ripped down within hours. All must comply!

If you know the artist drop it in the replies! pic.twitter.com/nTe7sXWGwA

Not the Bee, a website from creators of the satirical Babylon Bee, posted an article about the posters headlined, “Someone put up this brilliantly based street art in D.C. and of course some Karen came along to tear it down.”

Tablet Magazine CTO Noam Blum found the posters in another location in D.C. and also tweeted a photo.