After some 2,000 Southwest flights were canceled over the weekend, with cancellations continuing into Monday and Tuesday, the airline’s CEO took a stab at damage control on Tuesday but just ended up bowing to the Team Biden mandate gestapo. 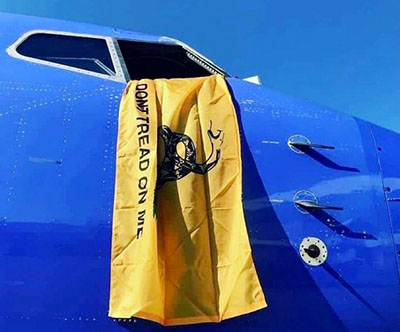 Multiple reports from independent media noted that the cancellations stemmed from a “mass sickout” by air traffic controllers and Southwest pilots.

Southwest claimed, and is sticking to the narrative, that the flights were canceled due to bad weather in Florida and air traffic control issues.

While insisting the mass cancellations have nothing to do with workers boycotting the vaccine mandate, Southwest Airlines CEO Gary Kelly on Tuesday said that, while he personally doesn’t approve of the mandate, Southwest will still obey the Biden order.

“I’m not in favor of that, never have been,” Kelly told CNBC’s Jim Cramer.

“But the executive order from Biden mandates that all federal employees, and then all federal contractors, which covers all the major airlines, have to have a mandate,” Kelly added.

BREAKING: Southwest CEO says he is AGAINST vaccine mandate, but defers to Biden’s federal mandate (which does not actually exist) pic.twitter.com/gT2xRzz0vi

“According to the president’s executive order, federal action supersedes any state mandate or law, and we would be expected to comply with the president’s order to remain compliant as a federal contractor,” Dallas-based airliner said in an emailed statement to Bloomberg.

Southwest Airlines is based in Dallas, Texas. On Tuesday Texas Gov. Greg Abbott issued an executive order banning all vaccine mandates, even for private businesses.

But Southwest still plans to obey the Biden order.

“According to the president’s executive order, federal action supersedes any state mandate or law, and we would be expected to comply with the president’s order to remain compliant as a federal contractor,” Southwest said in an emailed statement to Bloomberg.

This photo was just sent to me of a grounded Southwest plane flying a Gadsden flag out of the cockpit. The Hero Pilots at Southwest and other Airlines deserve our support. True patriots worthy of the American Freedom Fighter tradition.
Don’t Tread On Me.
God Bless Them 🇺🇸✈️🙏🏻 pic.twitter.com/tAo9pT4Q60

Meanwhile, during an interview on the Stew Peters Show, Dr. Jane Ruby cited several sources as confirming that a Delta Airlines pilot who had recently received the second dose of vaccine died during a flight.