The Southern Poverty Law Center (SPLC) reported $136 million in contributions and grants for 2017, more than doubling its intake from the previous year.

The reported revenue is “the latest indication that the Trump era has been a financial boon for the left-wing nonprofit,” Peter Hasson noted in an April 21 report for The Daily Caller. 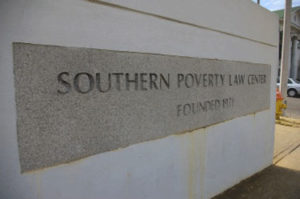 But the social media giants’ reliance on the SPLC by as a filter to screen out conservative content rebranded as “racist” points to the organization’s real power which is out of proportion with it revenue stream.

According to a report by the Media Research Center, the SPLC singles out conservative organizations by jointly categorizing them with known “hate” groups which are then suppressed or removed from its platform.

“Over time, Facebook deleted the pages of at least 57 such groups at the behest of the SPLC,” the report said.

The Capital Research Center, a conservative non-profit, was first to note the SPLC’s financial reports. The SPLC, which reported $50.2 million in revenue for 2016, ended 2017 with $449 million in net assets, including a $432.7 million endowment.

The Capital Research Center’s senior vice president, Matthew Vadum, noted that “it would appear the SPLC is cashing in by generating unjustified fear over a handful of fringe-right groups and by falsely portraying President Trump as a racist would-be fascist dictator.”

The SPLC’s endowment invites “charges that it oversells the threats posed by Klansmen and neo-Nazis to keep donations flowing in from wealthy liberals,” Ben Schreckinger wrote in a Politico Magazine piece in June 2017.

Hasson noted that “while the SPLC markets itself as a bulwark against white nationalists and the Klu Klux Klan, it has consistently mislabeled pedestrian conservative organizations as ‘hate groups,’ and critics of political correctness as ‘extremists.’ ”

In October 2014, the SPLC put Dr. Ben Carson – now the secretary of Housing and Urban Development (HUD) – on an “extremist watch list,” citing statements Carson had made including: “Marriage is between a man and a woman; it’s a well-established pillar of society.”

Carson remained on the SPLC’s list for four months, only being removed in February 2015 after public backlash.

“The SPLC has been tied to violence against conservatives in the past,” Hasson noted. “Floyd Lee Corkins, who opened fire at the Family Research Center (FRC) in 2012, said he chose the FRC for his act of violence because the SPLC listed them as a ‘hate group.’ ”