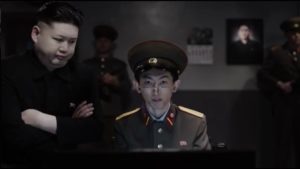 The ad says: “North Korea’s top hacker has been totally unable to steal AML BitCoin for two days and Kim is mad.”

The actor, who bears a striking resemblance to the leader U.S. President Donald Trump has referred to as “Little Rocket Man”, then says: “Why you not able to steal AML BitCoin?”

The company, which says its product complies with the Patriot Act and is safe from drug dealers and terrorists, ends the ad by saying: “Safe and secure. Sorry Dear Leader.”

Also blocked out was a veterans group which sought to publish an advertisement urging Americans to stand for the National Anthem.

The NFL rejected an ad by AMVETS calling on fans to “#PleaseStand” during the playing of the National Anthem. The print ad was slated to run in the official Super Bowl program.

According to reports, the NFL suggested the group change the ad to “Please Honor our Veterans” or “Please Stand for our Veterans”, which AMVETS rejected.

Marcus Andrade, the creator of AML BitCoin and a Service Disabled American Veteran said: “I cannot express more profoundly my shock and disappointment in the NFL. Having recently learned that the NFL would not allow a veterans organization to encourage Americans to stand for our flag, I can only conclude that something is very wrong with the NFL.”