Locals were hopeful as they banded together to try to protect their city, yet ominous storm clouds were on the horizon. 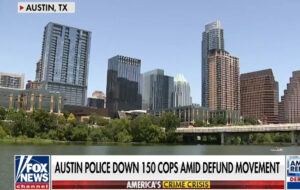 “It sickens me that out-of-town billionaires are able to swoop into Austin to fight against citizen-led ballot initiatives,” Austin City Council member Mackenzie Kelly told Fox News one month ago about progressive globalist George Soros’s giant money dump to fight off an attempt to get more police officers onto the streets of the crime-ravaged Texas state capital. “The purpose of our city’s charter is to allow regular, everyday people to fight for what they believe in when the city council fails them.”

The ballot initiative was called Proposition A, and it had simple and sensible goals:

If approved, Prop A would amend Austin City Code to establish minimum police staffing and require there to be at least two police officers for every 1,000 residents of Austin. It would also add an additional 40 hours of police training each year on topics like as active shooter scenarios and defensive tactics, and mandate that 35% of an officer’s shift must be spent on uncommitted time — often referred to as community engagement time — and not in responding to calls.

Soros poured $500,000 into the advocacy group dedicated to defeating Proposition A. Half a million dollars, for one local initiative in one city in one of 50 states.

On Nov. 2, the vote was held. And the effort to boost policing was crushed. Not just defeated but annihilated. The count was running 67%-33% as the day ended.

Democrat Mayor Steve Adler was overjoyed at the result:

Today, Austin voters rejected Proposition A, a ballot item that would have forced the City of Austin to spend $120 million to adopt an antiquated police staffing model of two police officers per one-thousand residents.

He really worded it that way. Two police officers for every 1,000 residents is “overpolicing” in the feverish minds of Democrats today.

The American-Statesman detailed the high stakes surrounding the ballot initiative:

The battle over Proposition A has been fierce, adding a chapter to the ongoing debate on policing and the best way to provide safety services to the city’s nearly 1 million residents….

The plan to add more officers is in response to Austin setting records for homicides at a time when officers are leaving the department in droves, many of them out of frustration over budget cuts the Austin City Council approved in 2020.

The Austin Police Department is budgeted for 1,809 sworn officers, but, because the council canceled three cadet training classes, has been unable to fill vacancies and currently employs about 1,600 officers.

How dire is the police understaffing crisis in Austin? Leesa Donner at Liberty Nation wrote in October:

The severe staffing shortage directly resulted from Austin City Council’s decision to cut $150 million from the police department budget last year. Crime statistics are alarming in Austin: As of April of 2021, the murder rate is up 200%, aggravated assaults 36%, and car theft has risen by about 77%. These figures, compiled by Austin’s KVUE-TV, are year-to-date compared to the same period in 2017.

To parse out its workforce, the Austin Police Department asks residents to dial 311 instead of 911 if they are dealing with a non-life-threatening emergency. This change comes on the heels of a warning by the Harris County Sheriff’s Deputies Organization in Houston, which told residents “that if they were “robbed, raped, or shot,” to “hold their breath and pray” because they might not have the personnel to respond.

In spite of all of this, Soros is staunchly committed to the “decarceration” of criminals campaign. And, amazingly, a compliant big-box media is still helping to push this toxic narrative more than a year after the Summer of George Floyd in 2020 dissolved in a sea of crime spikes across the nation.

A jaw-dropping op-ed published by The New York Daily News on Sept. 28 was penned by a radical activist from the heavily Soros-funded Vera Institute of Justice.

“As counterintuitive as it may seem, decarceration is actually good for public safety because it frees up money and resources to invest in communities and keep families together,” he continued.

What responsible newspaper would ever publish such tripe?

This wild-eyed prose was par for the course in the immediate wake of the death of Floyd last year. But that it continues today despite widespread public alarm expressed by regular Americans over growing criminal mayhem is a testament to the power of Soros.

A whopping 86% of the money raised to defeat Proposition A came from outside the state, according to Save Austin Now, the group that helped get the initiative on the ballot. So what’s the next move for regular citizens? Local elections:

Early vote #s for Prop A are down & illustrate power of campaigning on misinformation, w/ 86% out of state money – really, 🌲parks? If results hold & prop A loses, council & mayoral races are 5x as important. As horrific policies continue to drive up crime, they own the results.

But even there, the gloomy specter of Soros looms. The man is committed to destroying the social fabric of this nation, and he is operating on an extremely local level as he pursues his agenda.