Silenced Trump majority: TRUTH Social and the case for (re-)decentralizing the Internet

[Editor’s Note: Wall Street Journal’s generally conservative Editor at Large Gerard Baker termed Donald Trump “an ominous threat to the health of the republic” in an Oct. 25 column that failed to remind readers that Trump has been silenced by Big Tech and the corporate media in an unprecedented assault on a former president’s First Amendment rights. Trump’s and a very small number of alternative media organization’s “continuing rejection of the 2020 election is a unique challenge to orderly constitutional government,” he wrote.] 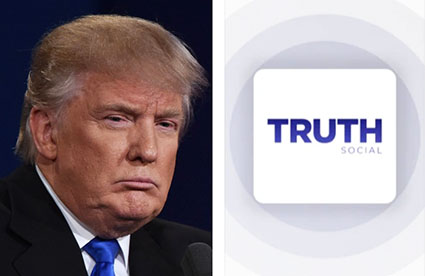 The Trump Organization plans to leverage TRUTH as a direct competitor to tech giants such as Facebook and Twitter. Following the announcement of TRUTH, Trump criticized the current state of online social platforms, quipping that the Taliban have a greater presence on Twitter than a former U.S. president.

TRUTH Social aims to release next month and its support from the Trump Organization carries some legitimacy. However, it remains to be seen if TRUTH Social will face similar issues that Gab and Parlor, the two most prominent alternative social media platforms centered on the principle of Freedom of Speech, have in the past.

Earlier this year, Parlor itself experienced deplatforming from Amazon Web Services and its domain registrar GoDaddy for Parlor’s userbase’s role at the January 6th unrest at the U.S. Capitol.

We have come to know the Internet through the handful of companies that have consolidated the most useful and popular services. However, the concept of the Internet itself is inherently decentralized i.e., connecting to other computers to access content (the “Cloud” can be thought of as someone else’s computer).

Whether TRUTH Social will be successful or be deplatformed, it’s important to be aware of such projects since they allow anyone to host content or a social media service in a manner that is truly free from Big Tech’s oversight.

Mastodon is one of the most popular decentralized social media projects currently. It features microblogging similar to Twitter and allows anyone to host a Mastodon node (“instance”) on their own server for free, with the sole condition that the hoster release the source code of the Mastondon node to its users. These nodes are run independently from the wider Mastodon network, allowing hosters to set their own content and moderation policies.

Indeed, even TRUTH Social is based on a Mastodon instance. Mastodon is part of the wider “Fediverse” (a portmanteau of “Federated” and “Universe”), which allows for easy integration with other federated services, such as PeerTube (a decentralized YouTube alternative) and others.

Most importantly, Mastodon is impervious to Tech giant monopolies since the base platform is freely available and end users are in complete control of their online profiles and communities.

Matrix is an open standard for real-time communication and facilitates services similar to Discord or Facebook Messenger. Similar to Mastodon, users or server providers can host their own chatrooms (called “homeservers”) which host their online identity. Communication with other matrix users replicates the data on each user’s homeserver, which means that a given conversation is digitally owned by all participants.

Matrix supports state-of-the-art, standardized encryption protocols to further ensure data secrecy and authenticity. Furthermore, the lack of a central authority solves the issue of needing to trust the online service, like the faith required to trust Telegram or Signal.

Big Tech’s hold comes from its ubiquity and brand recognition. It is up to us to diversify our online presence, and switching one centralized platform for another is not the solution. Using new decentralized Internet services, or hosting one of your own, can be a remedy for the current censorship epidemic and erodes the power Big Tech holds over our lives.

Richard N. Madden is a researcher in the fields of Cryptography and digital hardware design. He holds a Master’s degree in Computer Engineering with particular interest in security, data privacy and digital rights.

Silenced Trump majority: TRUTH Social and the case for (re-)decentralizing the Internet added by Editor One on October 25, 2021
View all posts by Editor One →