[Editors’ Note: Don Kirk normally lives in Seoul under the constant threat of a nuclear missile attack from North Korea. Currently on a road trip back in the USA, he’s taking dead aim at the “gun nuts” on this side of the Pacific. Don is believed to be unarmed and dangerous. Readers are advised.]

WICKENBURG, Ariz. ― Statues, plaques and memorials remind visitors of the violence that once prevailed in this pleasant town of about 6,000 people 65 miles northwest of Phoenix.

Here was the Wild West, where gun-toting cowboys fought with the original inhabitants of the land, the American Indians, or Native Americans who had arrived millennia before them. Here too, miners for gold and copper struck it rich in a desert of vast flatlands and rocky outcroppings. Opposite my hotel is a freshly painted wooden structure with balconies and a front porch that I’m told historically was a brothel, now more or less a tourist attraction. 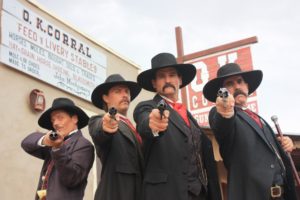 You understand, talking to people here, why the prevailing view is that everyone is entitled to carry a gun for both self-defense and hunting. Driving down a nearby road, I saw a deer scampering out of my way and barely missed a large jackrabbit hopping ahead of me.

The real danger, to a lot of people here, comes from all those outsiders, illegal immigrants from south of the border or newcomers from the Middle East. As for the Native Americans, they were consigned long ago to reservations where the lucky ones profit off casinos while others suffer depression and alienation.

Immersed in this type of culture, you begin to see the responses to the latest American-style mass killing. No, we don’t send people to some remote gulag where they die of overwork, hunger and disease. We’ve long since become accustomed to multiracialism and multiculturalism, an environment in which most people would claim to be tolerant and accepting of differences. And yet, hearing views about the slaughter in Orlando, you find all the old prejudices, insinuations and political blame-gaming dominating conversations in which obviously no one has the answers.

Who would believe, for instance, that some gun lobbyist on one of those endless television panel discussions would be deploring the temptation to “politicize” the conversation by calling for strict gun control. Could it really be true that large numbers of Americans still think it’s OK, guaranteed by the U.S. Constitution, to walk into a shop and buy an automatic or semi-automatic weapon of the sort used by military forces? Yes, it’s understandable, in the context of these wide open spaces, for people to think they have every right to own hunting rifles, but automatic weapons? Please.

The argument offered by gun enthusiasts, which actually may be a shocking near-majority of Americans, is that all we need are tighter checks, psychological evaluations, real control over bad guys. Are they saying everyone walking into a shop that says “Guns,” as do quite a few around here, should sit down and take a mental fitness test? Nope, no way. Somehow, mysteriously, we’re supposed to know the psychological outlook of everyone based on records of previous clashes with authorities, arrests, FBI investigations and the like.

Nor do gun people think those buying weapons should have to have licenses similar to those needed for driving. It’s one thing to require anyone at the wheel of a vehicle to have a license before hitting the road, but why demand the same of those purchasing weapons? Testing and licensing gun owners is anathema, they claim, a violation of the sacred U.S. constitution. Forget that the constitution posits “the right of the people to keep and bear arms” on the need of “a well-regulated militia,” not on that of individual gun nuts.

Debate over the Orlando shooting, however, goes far beyond that of whether lives would have been saved if everyone in a crowded, darkened nightclub had been carrying weapons with which they could have annihilated the shooter. Questions arise over what to do about the Islamic State of Iraq and Levant (ISIL), and “radical Islam” in general.

A topic of considerable foolish quibbling has been the degree to which President Obama and the likely Democratic Party candidate, Hillary Clinton, condemned extremism. Donald Trump, her likely Republican foe, pounced upon what he perceived as the lack of passion of both of them in pursuing Islamic terrorists. He even hinted that Obama knew more than he was letting on, that he may have had some knowledge beforehand of what was coming.

Then too there’s the question of the degree to which the FBI, CIA, NSA and others should be able to tap into phone conversations and internet messages in order to track down would-be terrorists. Liberals decry any such intrusion as a basic infringement on civil liberties, but then how else are we to know in advance about terrorists plotting still more dastardly plots?

No one has the answer to these questions. Confusion reigns in print, on TV and online. Experts have widely differing views. Here in this one-time frontier community, the easy answer is to follow the advice of Donald Trump, keep out the Muslims and build a fence blocking the flow of Mexicans. Never mind that such ideas are against the basic principles of the democracy in which we all profess to believe.

To many, the only principle that counts is the right to have a gun to shoot up the bad guys.

Donald Kirk, journalist and author, has been covering war and peace for decades. He’s at kirkdon4343@gmail.com.

and may the good guys win, Arizona, gun nuts, illegal immigration, Kim Jong-Un, Shooting it out in America, Wickenburg, WorldTribune.com