The Trump administration’s pledge to phase out government funding for public broadcasting was met with cheers from conservatives and jeers from the Left. 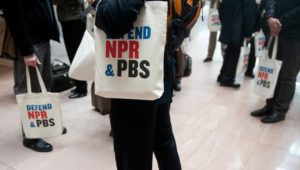 “This is fantastic news. There is absolutely no reason for the Corporation for Public Broadcasting (CPB) to receive taxpayer funding,” said Brent Bozell, president of the Media Research Center, in a statement. “I have long opposed taxpayer subsidization of public broadcasting because it’s not the federal government’s business to prop up media entities with taxpayer money.”

The president’s budget proposes $54 billion in cuts to large parts of the federal government, including steep cuts to agencies like the State Department and Environmental Protection Agency (EPA).

The budget proposed also ceases payments to the United Nations’ climate change programs for the Green Climate Fund and precursor funds and eliminates the National Endowment for the Arts.

Social conservatives have long opposed the spending of tax dollars on what they see as blatant left-wing narratives and opinions.

“Government shouldn’t fund propaganda aimed at its citizens — from any point of view,” Dan Gainor, vice president of business and culture at the Media Research Center told LifeZette. “The reality is, however, that NPR and PBS only push a left-wing agenda which is why the major media are all racing to their defense.”

“I care deeply about cultural literacy, the idea that we should all have access to a shared set of core concepts that will not only make it easier for children to learn to read and write, but that will give Americans at least some common language and ideas we can use to understand each other across our differences,” Rosenberg wrote.

Rosenberg’s “core concepts” would be all well and good if they weren’t seen as promoting a liberal, secular, and globalist worldview over traditional American values, conservatives say.

“If there are any doubts about how left-wing these outlets are, [just] look back at the Soros-funded NPR’s video scandal from 2011,” said Gainor.

In 2011, NPR CEO Vivian Schiller was forced to resign following the release of a sting video that showed Ron Schiller (no relation), a leading NPR executive, harshly criticizing conservatives.

After calling conservatives “anti-intellectual,” Schiller proceeded to single out what he called “Tea Party people.” They aren’t “just Islamophobic, but really xenophobic. I mean basically they are, they believe in sort of white, middle-America gun-toting. I mean, it’s scary. They’re seriously racist, racist people,” said Schiller.

Office of Management and Budget Director Mick Mulvaney told reporters on March 16 that “you won’t see a zero next to it, but the policy is that we’re ending federal involvement with the Corporation for Public Broadcasting.

“Next year it might be zero [but] it may take a while to unwind that relationship, it’s just the nature of contracts.”