Sheriff: Residents should tell gun-inspecting ATF agents showing up without warrants to take a hike

A sheriff in Washington state is advising residents in his county that they should turn away any agents from the Bureau of Alcohol, Tobacco, Firearms and Explosives (ATF) who come to their homes without a search warrant asking to inspect their firearms. 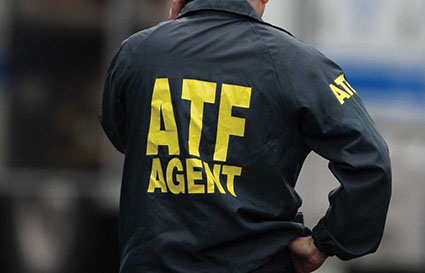 Klickitat County Sheriff Bob Songer told The Washington Times he became concerned about the Second Amendment rights of residents of after viewing a doorbell video that showed a firearms owner who ATF agents coerced, without a warrant, to inspect his firearms.

The ATF agents are “making surprise home visits of persons who have purchased two or more firearms at one time,” Songer said.

Songer added that, while the ATF visits have not occurred in Washington State yet to his knowledge, that if residents are contacted by an ATF agent or any other federal agent lacking a search warrant to inspect firearms they have purchased, residents do not have to cooperate with the authorities and should contact his office.

The sheriff suggested resident tell the agents to leave their property. If they refuse, “they are trespassing,” he said. Sheriff Songer said they should then call the Klickitat County Sheriff’s Department and report the incident, which could lead to the arrest of the federal agents.

“If the ATF agents do not have a search warrant signed by a judge, and you have told them to leave your property and they refuse to do so, call me, and I will make contact with the agents,” Songer said. “If they still refuse to leave, I will personally arrest the ATF agents for Criminal Trespass and book them into the Klickitat County Jail.”

“In my opinion, these surprise visits by ATF Agents are nothing more than a fishing expedition to see what guns you have in your possession,” Songer added.

“The ATF must answer questions on why they decided to conduct an illegal search, especially since the homeowner had done nothing wrong,” Songer said. “These actions by the federal government are unsettling, and they have no business going door-to-door to see who owns firearms. I fear that there will be more illegal inspections to come as the Left continues its assault on our 2nd Amendment rights. Congress should investigate this immediately.”

The ATF defended itself in a statement to The Washington Times, saying the agents’ actions were “entirely appropriate.”

Sheriff: Residents should tell gun-inspecting ATF agents showing up without warrants to take a hike added by Editor Two on July 25, 2022
View all posts by Editor Two →