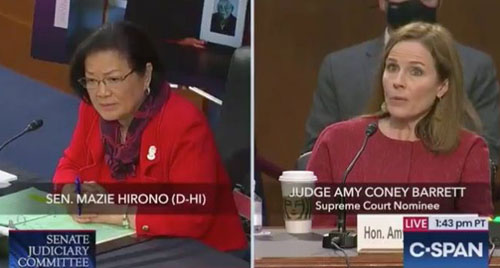 “If it is your view that sexual orientation is merely a preference … then the LGBTQ community should be rightly concerned whether you would uphold their constitutional right to marry,” Hirono told Barrett. The senator insisted she thought it was “not an accident” that Barrett used the term.

The preferred term is “sexual orientation.”

So, then Hirono must also be concerned that Democrat presidential candidate Joe Biden might not uphold the LGBTQ community’s constitutional right to marry, right?

On several occasions during the presidential campaign, Biden has used the term “sexual preference.”

In May, Biden promised to “rebuild the backbone of this country, the middle class, but this time bring everybody along regardless of color, sexual preference, their backgrounds.”

An LGBTQ-rights advocate used the term last month in an interview with The Advocate.

“The term preference as used to refer to sexual orientation is widely considered offensive in its implied suggestion that a person can choose who they are sexually or romantically attracted to,” the dictionary added in extra guidance of usage.

The dictionary confirmed the change was made because of the Senate hearing.