A transgender student’s “twerking and grinding” in a high school girls locker room is being cited in a lawsuit filed in federal court by a group of Virginia parents seeking to stop that state’s public schools from opening locker rooms and showers to members of the opposite sex.

The case being cited in the Virginia case occurred at a Minnesota public high school, which the lawsuit says “turned a blind eye” to the incident in the girls locker room. Alliance Defending Freedom (ADF) is representing at least 11 families in the case. 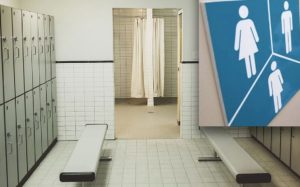 “School policies should promote the rights and safety of every student, but that’s not what Virginia Public Schools is doing – and it’s certainly not what the departments of Education and Justice are doing,” ADF senior counsel Gary McCaleb said. “No child should be forced into an intimate setting, like a locker room, with someone of the opposite sex.”

“No government agency should hold hostage important education funding to advance an unlawful agenda,” the lawsuit states. “No school district should trade its students’ constitutional and statutory rights for dollars and cents, especially when it means abandoning a common sense practice that long protected every student’s privacy and access to education.”

District 706 opened its schools’ locker rooms and showers and restrooms to boys who identify as girls after the Justice Department and Department of Education “issued a directive warning schools to either accommodate transgender students or lose federal funding,” according to a FoxNews.com commentary piece by Todd Starnes.

In the Minnesota case cited in the lawsuit, Starnes writes that “under the school district’s policy, the transgender student (identified as Student X) was allowed to use the bathrooms and locker rooms of his choice. The child was also allowed to participate on girls athletic teams.
“Alliance Defending Freedom alleges Student X engaged in inappropriate and sexually suggestive behavior – leaving some girls in tears.”

“Student X commented on girls’ bodies while in the girls’ locker room, including asking Girl Plaintiff F about her bra size and asking her to “trade body parts” with him; Student X danced to loud music with sexually explicit lyrics while twerking, grinding and lifting up his skirt to reveal his underwear; Student X would dance in a sexually explicit manner “dancing like he was on a stripper pole” to songs with suggestive lyrics including “Milkshake” by Kelis.

“The school told girls who felt uncomfortable they should consider using a secondary locker room in the basement of the elementary school.”

ADF Attorney Matt Sharp told Starnes that the school district turned a blind eye to complaints raised by the girls and their parents.

“The school was very unsympathetic,” Sharp said. “This is showing what we have been warning for months now. When you strip away student privacy, there’s going to be consequences for that.”