Seriously? Peter Daszak gets another NIH grant to study coronaviruses

A former vice president at EcoHealth Alliance, Andrew Huff, has said in a sworn affidavit that Peter Daszak’s EcoHealth Alliance “developed” SARS-CoV-2, the virus which causes Covid-19 infection, through gain-of-function research at the Wuhan Institute of Virology. 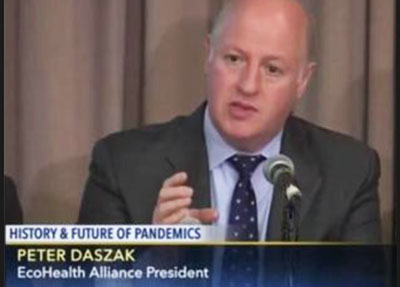 Now, Daszak has received another grant from the National Institutes of Health (NIH) to study coronaviruses.

The grant (which can be viewed here) states:

“Specific Aim 2) sampling and PCR screening of bats and other wildlife at community surveillance sites.”

One of Daszak’s aims is, according to the grant, to obtain though project samples “full genome sequencing and cell entry assays to assess ability to infect human cells.”

The grant comes “after everything the world has just been though. After all the risky research that was supposed to protect us from a global pandemic failed to stop one,” former economist and biotech analyst William Eden noted in an Oct. 1 tweet.

“If there were any Justice in the world there would at least be an extremely thorough investigation, and an immediate ban on collecting samples, running infectivity assays in human cells, and storing or transporting live viruses.

“At the VERY LEAST we could put a stop to Daszak getting further funding for the exact thing we are rightly worried caused the pandemic. If there’s even *any shred of doubt* this caused millions of deaths worldwide, the work should be at least paused until further notice.

“I must conclude that these organizations are both shameless, and completely irredeemable. There is a failure of leadership and common sense so profound we should shut down the NIH immediately and fire anyone involved, before starting with a clean slate. I see no other way.

“And yet, nothing will be done. No one will stop these people. There should be only one platform for anyone running for office today: never let this happen again! But no. There is no sanity left in the system. I simply don’t know what to say anymore.”

Seriously? Peter Daszak gets another NIH grant to study coronaviruses added by Editor Two on October 2, 2022
View all posts by Editor Two →