Leftist demonstrators who set up camp outside the Supreme Court building were intent on protesting whoever President Donald Trump nominated to fill the seat of late Justice Antonin Scalia, a Republican senator said.

Nebraska Sen. Ben Sasse said he went to the site and discovered what he called a “Mad-Lib protest.” 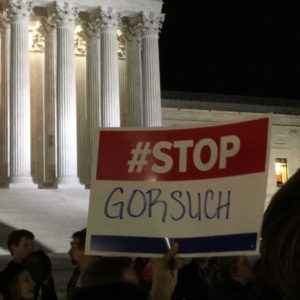 Sasse tweeted: “Went to the Supreme Court to talk to the protesters. But it turns out to be a Mad-Lib protest. #Fill-In-The-Blank,” and added a picture reading, “Stop Gorsuch.”

The sign only had the word “Stop” printed on it, with “Gorsuch” added, after his name was announced, in marker.

Sasse then tweeted, “By the way, protesters- Among those who were in the Senate when Gorsuch was last unanimously confirmed: *Obama *Biden *Clinton & *Schumer.”

Meanwhile, a Democratic senator who scolded Republicans for considering a filibuster of an Obama nominee to the Supreme Court, now says he won’t rule out a filibuster of Trump’s nominee.

Sen. Dick Durbin of Illinois, the No. 2 Democrat in the Senate, said on Fox News Sunday that he would not oppose a “mainstream” nominee but would not rule out a filibuster of one who is “too extreme on the right.”

“Let me just say, I’m not going to jump ahead and tell you how I’m going to treat any nominee until I know who they are, what they stand for,” Durbin said. “What we’ve said is that if you’ll bring us a moderate nominee and I told the White House this directly, one that is not too extreme on the right, on the left you won’t run into controversy.”

When pressed by host Chris Wallace, the senator declined to renounce the filibuster.

In the early days of the Obama administration, Durbin argued that filibustering Supreme Court nominees goes against Senate practice.

“Historically, Supreme Court justices have never been filibustered, and I would hope they would not consider that,” he told reporters in May, 2009, several weeks before former President Barack Obama nominated Sonia Sotomayor to succeed Justice David Souter.

The Senate has only successfully filibustered one Supreme Court nominee. President Lyndon Johnson attempted to appoint Justice Abe Fortas as chief justice after Earl Warren announced his retirement in 1968. The nomination was blocked by a bipartisan coalition of senators wary of Fortas’s relationship with Johnson, and troubled by rumors of an ethics scandal. He resigned the bench in disgrace a year later.

Democratic Sen. Jeff Merkley told reporters on Jan. 30 that he would filibuster any nominee put forward by Trump, except Judge Merrick Garland, who Obama nominated last year. Merkley claims most of the Democratic caucus will join him in the effort.