Team Biden’s online asylum system, in which practically anyone can claim “credible fear” as a reason for applying for asylum, is an “open invitation for Chinese spies” to attempt to enter the U.S., Oklahoma Republican Sen. James Lankford said. 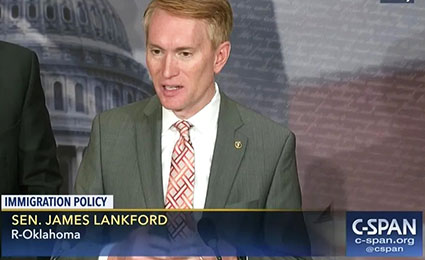 Under Team Biden’s plan, asylum seekers “can just say, ‘I have credible fear,’ fly into the country, and be here for eight years while they await their hearing,” Lankford told Just the News after speaking at the America First Summit last week.

Lankford said the system, designed to allow individuals to apply for asylum from anywhere in the world, will “dramatically increase the amount of illegal immigration into our country.”

“Immigration is not designed to be just open to anyone who wants to come. Asylum is the same definition as refugee. If you’re a refugee, you go to the next safest country. They’re turning this on its head, saying if anyone wants to come to America for any reason, just come here, and we’ll just take you from everywhere. That’s not what we’re designed to be able to do,” Lankford said.

Lankford, a member of the Committee on Homeland Security and Governmental Affairs, added that the Biden administration is “facilitating this catch-and-releasing,” referring to Biden’s policy of allowing illegal immigrants who arrive at the U.S.-Mexico border to claim asylum to get released into the U.S. to wait for their court date. “We have catch-release at the border, and now they’re looking for catch and release to happen at the border and at our airports.”