‘Second-class dreamers’: Why the ruling class did not mourn death of Colts linebacker Edwin Jackson

Edwin Jackson was a linebacker for the Indianapolis Colts. He had just finished his second year in the NFL. His future was full of promise.

Yet, he was killed on Super Bowl Sunday by an illegal immigrant drunk driver from Guatemala. Jackson was a Dreamer too. His dreams are now gone — snuffed out by someone who shouldn’t have been here in the first place.

This is the real story of open borders and mass illegal immigration: The tragic toll it has taken upon countless citizens, who have become collateral damage in our elites’ war against America. 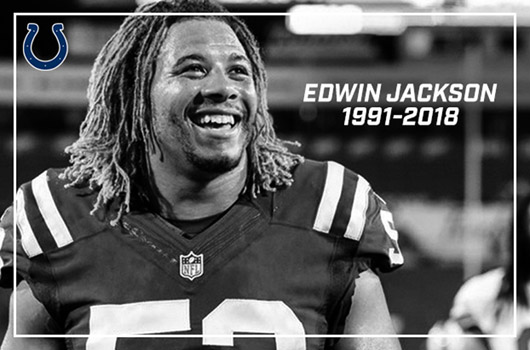 What was Jackson’s sin? He decided to go out Saturday evening and enjoy the Indianapolis night life. He called an Uber driver to take him home. Early Sunday morning, Jackson became ill in the car. The driver, 54-year-old Jeffrey Monroe, parked along Interstate 70 to help Jackson. They were both killed as a drunken Manuel Orrego-Savala smashed his pickup truck into them.

Orrego-Savala was not just an illegal alien. He had been previously deported two times. The first time in 2007; the second time in 2009. In other words, this criminal thug had repeatedly crossed our porous southern border. Had the federal government been doing its job and preventing illegals from entering our country, Jackson and Monroe would be alive today.

No one, however, weeps for them. Instead, our political and media class is obsessed with protecting the so-called “Dreamers”—illegal immigrants who were brought into the U.S. as minors by their parents.

The reason Jackson and Monroe — along with the countless other victims of violent criminal illegal aliens — have been abandoned is that they have become second-class citizens.

Our ruling class, hungry for cheap, foreign labor and millions of potential Democratic voters, are willing to sacrifice American lives at the altar of globalism and open borders.

This is why both establishment Republicans and liberal Democrats refuse to fund President Trump’s border wall. It would help restore control over our borders and block the invasion of unlimited Third World immigration.

The Senate bipartisan budget deal is an example of the extent to which Washington hates not only Trump’s America First agenda, but the American people itself.

The deal calls for a massive $400 billion increase in military and non-defense domestic spending over 2 years. The debt limit will be lifted until March 2019. The deal would expand the size of the federal government by 13 percent. It significantly adds to our already crippling $21 trillion national debt. Every special interest group gets a slice of the action — the military, corporate welfare, big agricultural subsidies, the public sector unions, education bureaucrats, welfare deadbeats, the National Endowment for the Arts, Planned Parenthood.

There is only one thing that isn’t funded: the wall.

The construction of a long, defensive fortification—the modern-day equivalent of Hadrian’s Wall — along the U.S.-Mexican border would not only halt illegal immigration, drug trafficking and criminal gangs, such as MS-13, pouring in from the South. It would reassert America’s sovereignty and national identity. Trump’s wall would signify that the Clinton-Bush-Obama era of economic globalization and trans-nationalism is over. It would mean a decisive transfer of power from our corrupt elites back to the people — the backbone of American democracy.

This, more than anything else, explains the media’s hysteria regarding the wall.

A case in point is the Boston Globe’s Jeff Jacoby. In a recent piece, entitled, “Trump’s Berlin Wall,” (the title pretty much says it all) the columnist actually compares Trump’s desire to build a wall to the decision by East Germany in 1961 to erect the infamous Berlin Wall.

Jacoby is supposed to be the Globe’s token “conservative” on its otherwise far-left Op-Ed page. He isn’t.

Like David Brooks at the New York Times, Jacoby is an intellectual phony and RINO Republican posing as a conservative. And to serve his paymasters at the leftist Globe, he can always be counted on to be a rabid Never Trumper. Although I have to admit, for Jacoby to imply that Trump is a wannabe East German communist dictator is a new one.

Yet, the comparison is not just ridiculous. It is pathetic. The Berlin Wall was designed to help a totalitarian regime keep dissidents in; Trump’s wall seeks to help a constitutional democracy keep foreign invaders out. Jacoby also argues that Trump’s wall would be a waste of money and effort. The reason: a majority of illegal immigrants overstay their visas, they do not come in through the southern border. Hence, according to Jacoby, the wall is simply an expression of xenophobic nativism. Mexico, he says, is our “friend.” And one should never build walls between friendly nations.

This is globalist nonsense. To claim that Trump shouldn’t build a wall because most illegals overstay their visas is akin to saying that FDR shouldn’t have fought World War II on two fronts — in the Pacific and in Europe. Nazi Germany may have been the bigger threat. But Imperial Japan posed a mortal danger as well. (And it was the Japanese who attacked us at Pearl Harbor). One can walk and chew gum at the same time. America can secure its borders and crack down on the rampant abuse of its visa system.

Moreover, Mexico is not a “friend.” It’s not even an ally. It is a venal, corrupt narco-state controlled by the Mexican drug cartels. Last year alone, over 25,000 Mexican civilians were slaughtered due to gang violence or narco-traffickers. These cartels are flooding our streets and neighborhoods with drugs, gangs and criminals. Their route of choice: our porous southern border.

Mexico’s narco-terrorists have declared war on America. National Mexican newspapers and Mexican public schools routinely preach that California, Texas, Arizona, Nevada and New Mexico is “stolen land” that belongs to Mexico. They openly call for the “Reconquista” — the reconquest of the entire U.S. Southwest. Through massive illegal immigration Mexico is trying to regain historical territory that it lost militarily over 150 years ago.

Like all globalists, Jacoby is an ideologue, who loathes his own country and his own people. Yet, this begs the question: How many more innocent Americans must die before our pro-open borders elites admit that our southern border is a bleeding sore. Edwin Jackson, Kate Steinle, Matthew Denise — and thousands of others like them were killed by illegal aliens who entered America through the desert. These murderers did not come by air or sea and overstay their visas. They came in unlawfully and by land. A wall would’ve stopped them. A wall will stop them.

Our deracinated elites, however, don’t care. They have blood on their hands. They long ago abandoned any loyalty to America. There is only one word to describe them: traitors.