Editors’ Note: The following are excerpts from a January speech given by columnist Daniel Greenfield in Myrtle Beach, South Carolina which have been cycling on the Internet:

This is a civil war.

There aren’t any soldiers marching on Charleston… or Myrtle Beach. Nobody’s getting shot in the streets. Except in Chicago… and Baltimore, Detroit and Washington, D.C. 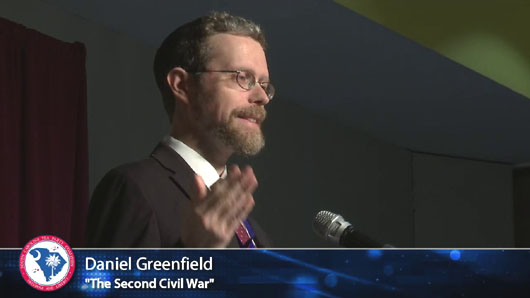 But that’s not a civil war. Guns are how a civil war ends. Politics is how it begins.

How do civil wars happen?

Two or more sides disagree on who runs the country. And they can’t settle the question through elections because they don’t even agree that elections are how you decide who’s in charge.

I know you’re all thinking about President Trump.

He won and the establishment, the media, the Democrats, rejected the results. They came up with a whole bunch of conspiracy theories to explain why he didn’t really win. It was the Russians. And the FBI. And sexism, Obama, Bernie Sanders and white people.

It’s easier to make a list of the things that Hillary Clinton doesn’t blame for losing the election. It’s going to be a short list.

Now say a Republican wins an election in say, 2024. What are the odds that Democrats will say that he didn’t really win? Right now, it looks like 100 percent.

There’s no shooting. At least not unless you count the attempt to kill a bunch of Republicans at a charity baseball game practice. But the Democrats have rejected our system of government.

This isn’t dissent. It’s not disagreement. You can hate the other party. You can think they’re the worst thing that ever happened to the country. But then you work harder to win the next election. When you consistently reject the results of elections that you don’t win, what you want is a dictatorship. Your very own dictatorship.

The only legitimate exercise of power in this country, according to the Left, is its own. Whenever Republicans exercise power, it’s inherently illegitimate.

The attacks on Trump show that elections don’t matter to the Left. The Left lost Congress. They lost the White House. So what did they do? They began trying to run the country through federal judges and bureaucrats. Our system of government is based on the Constitution, but that’s not the system that runs this country.

The Left’s system is that any part of government that it runs gets total and unlimited power over the country. If it’s in the White House, then the president can do anything. And I mean anything. He can have his own amnesty for illegal aliens. He can fine you for not having health insurance. His power is unlimited. He’s a dictator.

But when Republicans get into the White House, suddenly the president can’t do anything. He isn’t even allowed to undo the illegal alien amnesty that his predecessor illegally invented.

Whether it’s Federal or State, Executive, Legislative or Judiciary, the Left moves power around to run the country. If it controls an institution, then that institution is suddenly the supreme power in the land.

If they don’t have either the White House, Congress or the Supreme Court, they’re screwed. Right? Nope.

They just go on issuing them through circuit courts and the bureaucracy. State governments announce that they’re independent republics. Corporations begin threatening and suing the government.

The only consistent pattern here is that the Left decided to make it illegal to enforce immigration law.

That’s how it works. It’s the moving dictatorship. It’s the tyranny of the network.

It’s an ideological dictatorship. Some people call it the Deep State. But that doesn’t even begin to capture what it is.

To understand it, you have to think about things like the Cold War and communist infiltration. A better term than Deep State is Shadow Government.

Parts of the Shadow Government aren’t even in the government. The shadow government is an ideological network. These days it calls itself by a hashtag #Resistance. Under any name, it runs the country. Most of the time we don’t realize that. When things are normal, when there’s a Democrat in the White House or a bunch of Democrats in Congress, it’s business as usual.

Even with most Republican presidents, you didn’t notice anything too out of the ordinary. Sure, the Democrats got their way most of the time. But that’s how the game is usually played.

It’s only when someone came on the scene who didn’t play the game by the same rules, that the network exposed itself. The shadow government emerged out of hiding and came for Trump.

And that’s the civil war.

We’ve been having this fight for a while. But this century things have escalated. They escalated a whole lot after Trump’s win because the network isn’t pretending anymore. It sees the opportunity to delegitimize the whole idea of elections.

Now the network isn’t running the country from cover. It’s actually out here trying to overturn the results of an election and remove the president from office. It’s rejected the victories of two Republican presidents this century.

And if we don’t stand up and confront it, and expose it for what it is, it’s going to go on doing it in every election. And eventually federal judges are going to gain enough power that they really will overturn elections. It happens in other countries. If you think it can’t happen here, you haven’t been paying attention to the Left.

Right now, federal judges are declaring that President Trump isn’t allowed to govern because his tweets show he’s a racist. How long until they say that a president isn’t even allowed to take office because they don’t like his views?

America was different. We had a volunteer government. That’s what the Founding Fathers built.

You know, the people who always say they know better, no matter how many times they screw up, because they’re the professionals. They’ve been in Washington, D.C. politics since they were in diapers.

Freedom can only exist under a volunteer government. Because everyone is in charge. Power belongs to the people.

Now what’s the Left? Forget all the deep answers. The Left is a professional government.

It’s whole idea is that everything needs to be controlled by a big central government to make society just. That means everything from your soda sizes to whether you can mow your lawn needs to be decided in Washington, D.C.

Just ask Mueller and establishment guys like him. What infuriates professional government more than anything else? An amateur, someone like President Trump who didn’t spend his entire adult life practicing to be president, taking over the job.

President Trump is what volunteer government is all about.

When you’re a government professional, you’re invested in keeping the system going. But when you’re a volunteer, you can do all the things that the experts tell you can’t be done. You can look at the mess we’re in with fresh eyes and do the common sense things that President Trump is doing.

And common sense is the enemy of government professionals. It’s why Trump is such a threat.

Now we’re seeing what the pros do when amateurs try to walk in on them. They spy on them, they investigate them and they send them to jail. They use the tools of power to bring them down.

That’s not a free country.

We’re in a civil war between conservative volunteer government and leftist professional government.

The pros have made it clear that they’re not going to accept election results anymore. They’re just going to make us do whatever they want. They’re in charge and we better do what they say.

That’s the war we’re in. And it’s important that we understand that. Because this isn’t a shooting war yet. And I don’t want to see it become one.

Democrats … tried to rig the system. They’ve done it by gerrymandering, by changing the demographics of entire states through immigration, by abusing the judiciary and by a thousand different tricks.

But civil wars come down to an easy question. Who runs the country?

They’ve given us their answer and we need to give them our answer.

Both sides talk about taking back the country. But who are they taking it back for?

The Left uses identity politics. It puts supposed representatives of entire identity groups up front. We’re taking the country back for women and for black people, and so on and so forth…

But nobody elected their representatives.

The Left’s identity politics only represents ideas. Nobody gets to vote on them. When they’re taking back the country, it’s always for professional government. It’s never for the people.

When conservatives fight to take back the country, it’s for the people. It’s for volunteer government the way that the Founding Fathers wanted it to be.

This is a civil war over whether the American people are going to govern themselves. Or are they going to be governed.

But that revolution was met with a counterrevolution by the Left. The left wants a monarchy.

I live in the state of Ronald Reagan. I can go visit the Ronald Reagan Library any time I want to. But today California has one party elections.

The Trump years are going to decide if America survives. When his time in office is done, we’re either going to be California or a free nation once again.

The civil war is out in the open now and we need to fight the good fight. And we must fight to win.