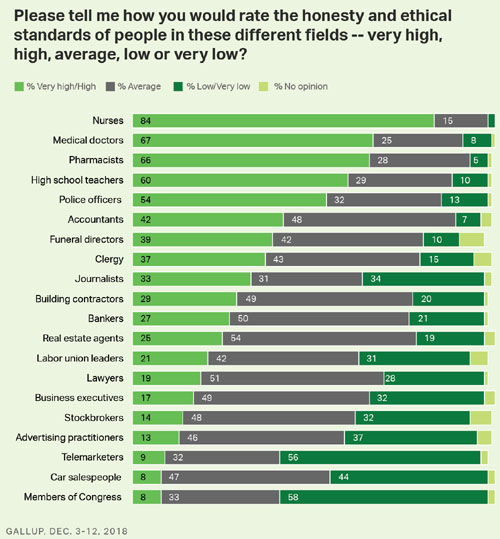 Car salespeople also garnered 8 percent in terms of high ethics, while telemarketers were at 9 percent.

In the Gallup poll, conducted from Dec. 3-12, journalists were rated by 33 percent as having “very high/high” ethics.

Even at 33 percent, the public’s view of the ethics of journalists is at a 41-year high, Gallup said.

“This year, positive assessments of journalists’ ethical standards have rebounded, owed largely to shifting opinions of Democrats and independents, who may be reacting to President Donald Trump’s repeated characterizations of the news media as ‘the enemy of the people,’ ” Gallup said.

Gallup explained the political division over journalism this way:

“Democrats’ very high/high rating of journalists’ honesty has jumped 21 points since 2016 to 54 percent this year. For their part, political independents’ views have shifted from a 42 percent low and a 20 percent high ethics rating to roughly one-third each now saying journalists have high, average and low ethics. At the same time, Republicans’ views are essentially unchanged, with 61 percent now giving journalists low ethics ratings.”

Nurses are on top of the high ethics ratings at 84 percent.