Senate Minority Leader Chuck Schumer is pressing Majority Leader Mitch McConnell to hold a vote on the Equality Act, H.R. 5, which passed the House on May 17 by a vote of 236-173.

“️Americans should be very proud today! The House just passed the bipartisan #EqualityAct. Because NO American should face discrimination simply because of who they are or who they love,” Schumer, New York Democrat, tweeted, calling for “McConnell to hold a vote in the Senate.” 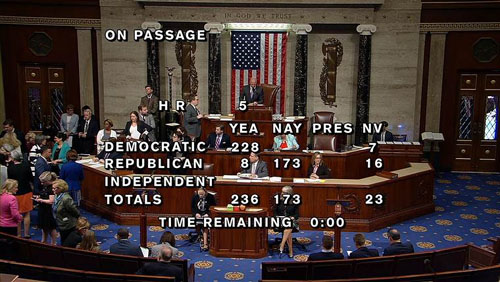 A spokesperson for McConnell told The Blade that Republican leadership had “no scheduling announcement regarding Senate action” on the Equality Act. President Donald Trump would likely veto the legislation if it ever makes it to his desk.

“The Trump administration absolutely opposes discrimination of any kind and supports the equal treatment of all,” a senior administration official told NBC News. “However, this bill in its current form is filled with poison pills that threaten to undermine parental and conscience rights.”

Eight Republicans joined all House Democrats in voting for the legislation.

Opponents say the Equality Act would force public schools to expand female athletic teams to include biological males who identify as transgender girls.

Republican Florida Rep. Greg Steube introduced a last-minute amendment to the bill that would have preserved Title IX’s protections of female athletic teams, but Democrats rejected it.

Three elite female athletes, Doriane Coleman, Martina Navratilova and Sanya Richards-Ross, warned in an April 29 op-ed for The Washington Post that the Equality Act would wreak havoc on women’s sports.

“The legislation would make it unlawful to differentiate among girls and women in sports on the basis of sex for any purpose. For example, a sports team couldn’t treat a transgender woman differently from a woman who is not transgender on the grounds that the former is male-bodied,” the former athletes wrote.

“Yet the reality is that putting male- and female-bodied athletes together is co-ed or open sport. And in open sport, females lose,” the three women warned.

“Many states have sexual orientation and gender identity nondiscrimination laws, and all of them still have women’s sports. Arguments about transgender athletes participating in sports in accordance with their gender identity having competitive advantages have not been borne out,” Nadler said.

In Connecticut, one of the states to which Nadler was referring, two male runners have dominated girls’ high school track. A female competitor called the male runners’ advantage “demoralizing.”