Where is the condemnation of a Jimmy Carter-appointed judge’s thin and extremely-flawed ruling on the Nicholas Sandmann defamation lawsuit filed against The Washington Post?

It’s frankly stunning that a professed constitutional “right” for corporate and multi-billionaire-owned media outlets to pluck innocent private citizens from out of obscurity and hold them up to worldwide public vitriol via a willfully reckless disregard of basic facts is being presented as the “pro-freedom argument” in our society today. It’s all the more repulsive when you consider that the private citizen in question here was 16 years old when the events in question occurred. 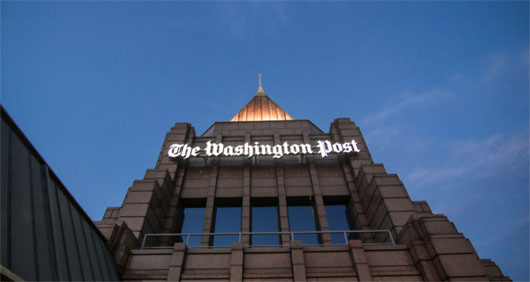 U.S. District Judge William Bertelsman’s 36-page ruling, filed on July 26, brushes aside The Post’s deliberate disregard for basic journalistic practices as it demonstrably got the facts wrong while painting young Sandmann as the face of hate in President Trump’s America. In dismissing the case before it ever came to trial, the judge made suspect rulings on Sandmann’s status as a litigant and on matters that deserved an evidential hearing, not verdict by judicial fiat.

Let’s begin with Sandmann’s standing. “The words [The Post] used [to describe the Make America Great Again hat-wearing teens] contain no reflection upon any particular individual,” Bertelsman declared in his ruling. Yet the paper did in fact single out the teen, writing:

“A Native American man steadily beats his drum at the tail end of Friday’s Indigenous Peoples March while singing a song of unity urging participants to ‘be strong’ against the ravages of colonialism that include police brutality, poor access to health care and the ill effects of climate change on reservations.

“Surrounding him are a throng of young, mostly white teenage boys, several wearing ‘Make America Great Again’ caps. One stood about a foot from the drummer’s face wearing a relentless smirk.”

An outrageously loaded tweet posted Jan. 19 on the Post’s official Twitter account featured a close-shot photo of a smiling and impassive Sandmann facing “tribe elder Nathan Phillips.” The tweet baldly and unskeptically plays up Phillips’ charge that the Covington “teens jeered and mocked him.”

Smirk. Jeer. Mock. Easily available video evidence clearly shows that this is not what happened. Yet due in significant part to the Post’s inflammatory reporting, the teen quickly became a focal point of progressive anger. Numerous wishes of inflicting physical harm were directed at him.

One cannot overstate how shameful The Post’s reporting was. The paper’s initial framing of the confrontation was based on nothing more than a short video clip that sparked a social media feeding frenzy. Without taking time to verify how accurately that clip represented the entirety of what happened, The Post dove in with both feet and used it to frame the Catholic high school students as hate-filled members of an intolerant Trump Youth.

The paper did not question a single part of Phillips’ assertion that he was a peaceful, spiritual Native American elder who was being menaced by the teens. Indeed he was zealously portrayed as an innocent lamb put in a precarious position. The Post also did not hesitate to repeat his claim to be a Vietnam veteran to further illuminate the favorable light it was radiating upon him. Yet Phillips was not a Vietnam vet. He intentionally misrepresented his military service to give that impression.

The Post eventually walked back its misleading coverage after Sandmann filed his lawsuit. In a March 1 editorial note tacked atop a Jan. 22 article, the paper wrote, “this version of the story has been revised to clarify that certain statements reported by Phillips are not corroborated by widely circulated video of the incident.”

The question remains as to why The Post did not take the time to view the “widely circulated video” itself before rushing off with its fully erroneous conclusions. It was easily available very shortly after the social media frenzy began. As journalism practice, this is simply unconscionable.

In his ruling, Bertelsman weakly made Sandmann out to be a public figure simply because he attended the March For Life. “Here the Post’s articles concern groups of citizens who were assembled in the nation’s capital to support or oppose various causes of importance to them. This is inherently a matter of public concern.”

This is an important point to ponder when considering the non-public individual’s right to personal privacy. Media outlets have long argued for an expansive view of the “public figure” concept precisely in order to avoid nasty lawsuits such as Sandmann’s. In a closely watched 1998 case the California Supreme Court ruled against the supermarket tabloid the Globe’s assertion that a man who was present at the assassination of Robert F. Kennedy was a public figure due to his mere presence at the Kennedy event. As the Los Angeles Times reported at the time, “the Globe was joined by the Los Angeles Times, the New York Times, CBS, NBC and ABC and other media” in appealing a verdict against it in a lower court. “The organizations argued that the media should be legally protected if they repeat untrue allegations in a public controversy as long as the reporting of the charges is accurate and objective.”

This of course is exactly similar to The Post’s defense of its glaringly erroneous Sandmann coverage. Khalid Khawar was accused of being the real assassin of RFK in an obscure book. The Globe repeated the false charge, blowing up a photo of Khawar at the event so that he would be more easily identified. The high court, in upholding the verdict of libel against the Globe, correctly noted the enormous personal damage caused to Khawar as a private individual.

“…[T]he report of such accusations can have a devastating effect on the reputation of the accused individual, who has not voluntarily elected to encounter an increased risk of defamation and who may lack sufficient media access to counter the accusations,” Justice Joyce L. Kennard wrote in her ruling.

You can say there is a world of difference between being called an infamous murderer and to how Sandmann was portrayed by The Post. You can also say with more than a bit of truth that in our politically correct society today being called a racist is the worst thing one can be publicly accused of. However you want to look at it is impossible not to acknowledge that Sandmann’s reputation took a very public beating due to the howling storm against him fueled in large part by The Post. That battering came from the use of blatant factually incorrect statements made by another individual that would have been quickly exposed as lies by even the most cursory good-faith investigation made by any reasonable media outlet. Yet Bertelsman amazingly declares the Post’s false reporting as mere “rhetorical hyperbole.”

“Instead, these statements contain terms such as ‘ugly,’ ‘swarmed,’ ‘taunting,’ ‘disrespect,’ ‘ignored,’ ‘aggressive,’ ‘physically,’ and ‘rambunctious.’ These are all examples of ‘loose, figurative,’ ‘rhetorical hyperbole’ that is protected by the First Amendment because it is not ‘susceptible of being proved true or false,'” the judge wrote.

A simple viewing of the more complete video shows without a shadow of a doubt that these loaded terms can indeed clearly be proven to be false. How can a group of teens be said to have aggressively swarmed a man who walked up to them and initiated a confrontation with people who were not bothering him in the slightest?

As attorney Alan Dershowitz said in explaining why he thought Sandmann had a strong case when he filed his suit, “[t]hese poor kids seemed to be doing exactly the right thing, and then suddenly because they are thought to be white, privileged kids, suddenly everyone’s ganging up on them.”

“The world was guilty of libel,” Dershowitz said of the enormity of abuse that rained down upon the teens. This libelous tsunami was given a cover of respectability due to a well-known newspaper’s wildly reckless false reporting.

Those myopically citing First Amendment concerns over a possible judgment against The Post are completely missing the boat on the true threat to liberty at stake here. If Bertelsman’s specious ruling is allowed to stand, powerful media corporations will have carte blanche to invade the personal privacy of citizens going about their daily lives and hurl them head over heel into a crushing media meat grinder. All they will have to say is “somebody said it was so, and we just repeated it.” There will be no burden on these organizations to practice the elemental standards of their profession, not to mention of human decency. They will be able to casually maim and malign at will and merely cite “public controversy” as a justification for it all.

Khalid Khawar’s attorney said it best two decades ago, hailing his client’s victory over the mainstream media that challenged his case as “a win for American journalism” in the long run.

Bring on the appeal.