In a nation of children, ‘it’s practically impossible to beat Santa Claus’ 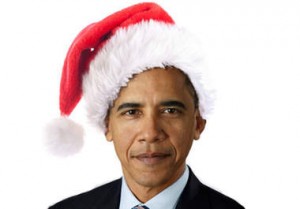 Romney’s recipe was the old standby: American route to success, hard work. That gets sneered at. I’m sorry. In a country of children where the option is Santa Claus or work, what wins?

The Obama campaign was about small stuff. War on Women, binders, Big Bird, this kind of stuff. The Romney campaign was about big things, was about America. It’s mind-boggling to go through these exit polls. You want to hear a statistic that is somewhat surprising? Romney received two and a half million fewer votes than McCain did. Now, who would have called that? Who in the world would have? I think Obama’s vote tally was down ten million from 2008, and we still lost. We lost 50 to 48 nationally. We were not able to build a turnout model that looked like 2004. Very puzzling.

Something else. Just stream of consciousness here. The usual suspects are out, and they’re saying, “Rush, we gotta reach out now to the Hispanics and reach out to the minorities, blacks.” Okay, let me remind you of something. Let me take you back to the Republican convention. We had Suzanne Martinez, female Hispanic governor, New Mexico. We had Condoleezza Rice, African-American, former secretary of state. Both of those people imminently qualified, terrifically achieved. They have reached the pinnacles of their profession.

We had Marco Rubio. We had a parade of minorities who have become successful Americans. And they all had a common story: up from nothing, hard work, their parents sacrificed for them. Now, why didn’t that work, folks? The answer to that is our future. Why didn’t it work? Some people say, “Well, Rush, we pandered.” No, we didn’t pander. Everybody says that we need to reach out to minorities. We have plenty of highly achieved minorities in our party, and they are in prominent positions, and they all have a common story. They all came from nothing. Their parents came from nothing. They worked hard. They told those stories with great pride. Those stories evoked tears. It didn’t work. And don’t tell me that people didn’t watch the convention or people didn’t see it. I mean, there’s a reason it doesn’t work. …

I went to bed last night thinking we’ve lost the country. I don’t know how else you look at this. The first wave of exit polls came in at 5 p.m. I looked at it, I read the first two pages, and I said to myself, “This is utter BS.” And I forwarded the exit poll data that I had to three or four people, and my message to each of them, “This is utter BS, and if it isn’t, then we’ve lost the country.”

In a nation of children, ‘it’s practically impossible to beat Santa Claus’ added by Editor One on November 8, 2012
View all posts by Editor One →