Residents in several Oregon counties, fed up with the ongoing riots in Portland and the draconian coronavirus lockdown orders of Democrat Gov. Kate Brown, are looking for a change of venue. They want their counties, mostly in the state’s eastern sector, to become Idaho territory. 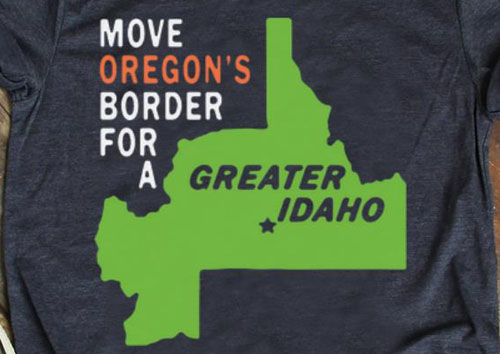 Volunteers with the group Move Oregon’s Border for a Greater Idaho have collected enough signatures to place an initiative on the November ballot that would enable Wallowa County, Oregon residents to decide if they would like the county to become part of Idaho.

There are 17 counties which are considering breaking off from Oregon and joining Idaho, Valerie Richardson noted in a July 19 report for The Washington Times.

“We want to move the border because the political atmosphere in Oregon is getting too intense,” Michael McCarter, president of Greater Idaho, said. “We’ve seen political violence in Portland and Eugene this year and it could get worse. Instead of fighting, Oregon could let citizens in each region of the state choose which state’s governance is more suitable to them.”

“Greater Idaho is collecting signatures in 15 of those counties for ballot measures that direct local officials to participate in negotiations on redrawing Idaho’s state line, a process that has been hampered by the statewide shutdown by Brown,” Richardson noted.

The organization filed a lawsuit June 30 in federal court to reduce the number of required valid signatures, arguing that the stay-at-home order has hampered the ability of volunteers to meet the Aug. 5 petition deadline on county ballot measures.

“This lockdown has hurt our ability to collect signatures,” McCarter said. “We’ve got volunteers in every single county that has our petition. We would have filed this suit earlier, but we were hoping the lockdown wouldn’t last this long.”

Last week, U.S. District Court Judge Michael McShane ordered the state to reduce by 50 percent the signature threshold for Politicians Not People, a statewide ballot campaign, and extend the deadline from July 2 to Aug. 17, citing the state lockdown.

In three counties — Jefferson, Union and Douglas — volunteers have collected more than half of the required signatures but need an extension to meet the deadline.

Sherman County requires only 60 valid signatures to qualify and McCarter said “we hope some volunteer will knock that one out.”

“Such border-shifting movements are long shots at best — no state has done so since West Virginia left Virginia in 1863 — but the inability or unwillingness of Portland authorities to quell the unrest has created a political climate in which the old rules no longer appear to apply,” Richardson wrote.

Idaho Gov. Brad Little, a Republican, has said he would welcome any would-be Idahoans from Oregon, although he said the movement has a long way to go given that both state legislatures and Congress would need to sign off on redrawing the state lines.

McCarter said the attempt is worth the trouble as the concerns of rural Oregon have been ignored or dismissed as political power concentrates in the leftist population centers of Portland and Eugene.

“Our message to Oregon’s state political leadership is: let our people go!” Greater Idaho said in a statement on its website. “Your counties have different goals, different values, and different economies. Your primary voters will be glad to get rid of ‘Trump-voting low-income counties.’ Let us be governed by a state that understands us. Please negotiate a deal with Idaho.”

The No. 2 Department of Homeland Security (DHS) official on Monday said that homegrown “terrorists” are to blame after the 53rd straight night of violence in Portland.

Acting Deputy Homeland Security Secretary Ken Cuccinelli, describing brutal assaults on federal police and agents, ripped reports that the department and other agencies are acting outside the law.

“These are not peaceful protests. This is violent, criminal activity. And when they show up directed at law enforcement, it’s terrorism. Law enforcement officers and agents have been targeted in the attacks,” said Cuccinelli. “We are talking about violent anarchists who are engaging in both violence, to the point of terrorism on occasion, and who have been assaulting federal property and officers night after night.”

“They were targeted because they were in uniform. That is terrorism, that is what that is,” he said, adding, “We are not talking about peaceful protesters.”

Cuccinelli is leading the Trump administration’s pushback against congressional Democrats and Portland Mayor Ted Wheeler, who want the agents out.

Acting Homeland Security Secretary Chad Wolf said his agents are not leaving Portland. “DHS is not going to back down from our responsibilities,” Wolf told Fox News. “We are protecting, again, federal facilities. It’s our job.”