These are troubling times.

On March 8 & 14, the S&P 500 closed at the lowest points since the middle of June. The most important stock market index in the world is down over 12% for the year and has only advanced 8% (including dividends) over the past 12 months. Inflation is hitting 40-year highs, a war and humanitarian crisis is erupting in Europe and Iran launched missile strikes perilously close to a new U.S. consulate in Iraq. 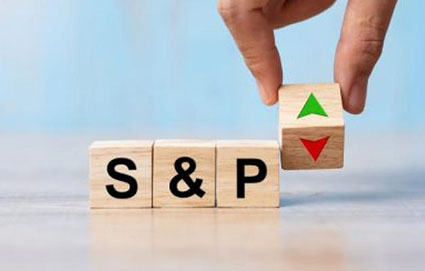 During December and early January, I provided ample evidence to support a very cautious approach to the markets this year. That is still the case today. Even with this past week’s bounce of over 8%, there is no change to the intermediate or longer-term outlook.

Caution has paid off. The portfolio I trade with Club Romulus is up over 2.5% for the year, outperforming the S&P500 by almost 10% as I write.

It is possible that stocks can continue the rally and turn into something spectacular. That would require better news from the war, but Putin is not winning as he expected, so a shaky peace might be in the offing. Oil prices are climbing back toward their highs, and the Fed has started raising interest rates.

The longer-term picture remains blurred. Internal market deterioration began last spring, long before the war. A sharp rally can certainly ensue, but without a selling climax, like what took place two years ago, any upside move will be haunted by a potential new wave of selling that will eventually take stocks below recent lows. As I said in my previous report, the market needs this capitulation. Without it, it will be the same thing we’ve seen since last spring, particularly since the beginning of this year. 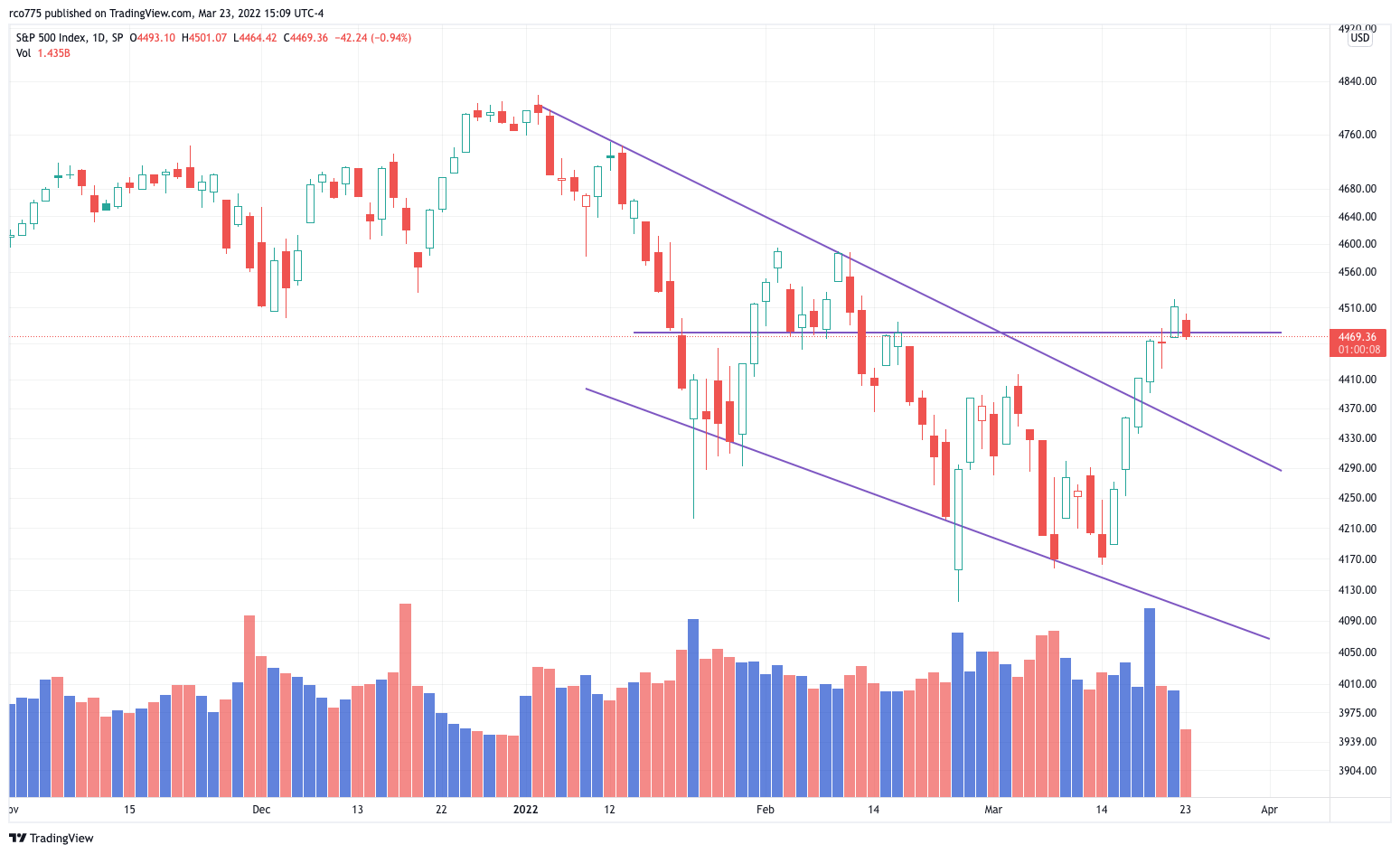 Amazon announced a 20 for 1 stock split on Mach 9. Before we discuss the ramifications of this news, let’s make sure we understand what a split is. If you own 1 share of Amazon stock now, you have $2,923 worth of the stock. After the split, you will own 20 shares of stock, but the share price will be $146.15, or $2,923 worth of stock. Your value does not change.

Every investment bank under the sun is now putting out research showing that stock splits are good for the share price over some period of time. Stock splits were popular in the 1990’s during the dot-com boom, but they died out in the last ten years as companies wanted to emulate Warren Buffet’s Berkshire Hathaway. Buffet has never split the stock, and now it trades for $494,311 a share.

Warren lost his magic touch over 20 years ago, though, and now firms—mostly large technology companies like Amazon—are grasping any straw to re-invigorate their lagging share prices.

Don’t fall for this.

In other words, the bounce in AMZN is not because of the stock split. It is simply following the general market. If AMZN drops further from here, it won’t be any surprise. 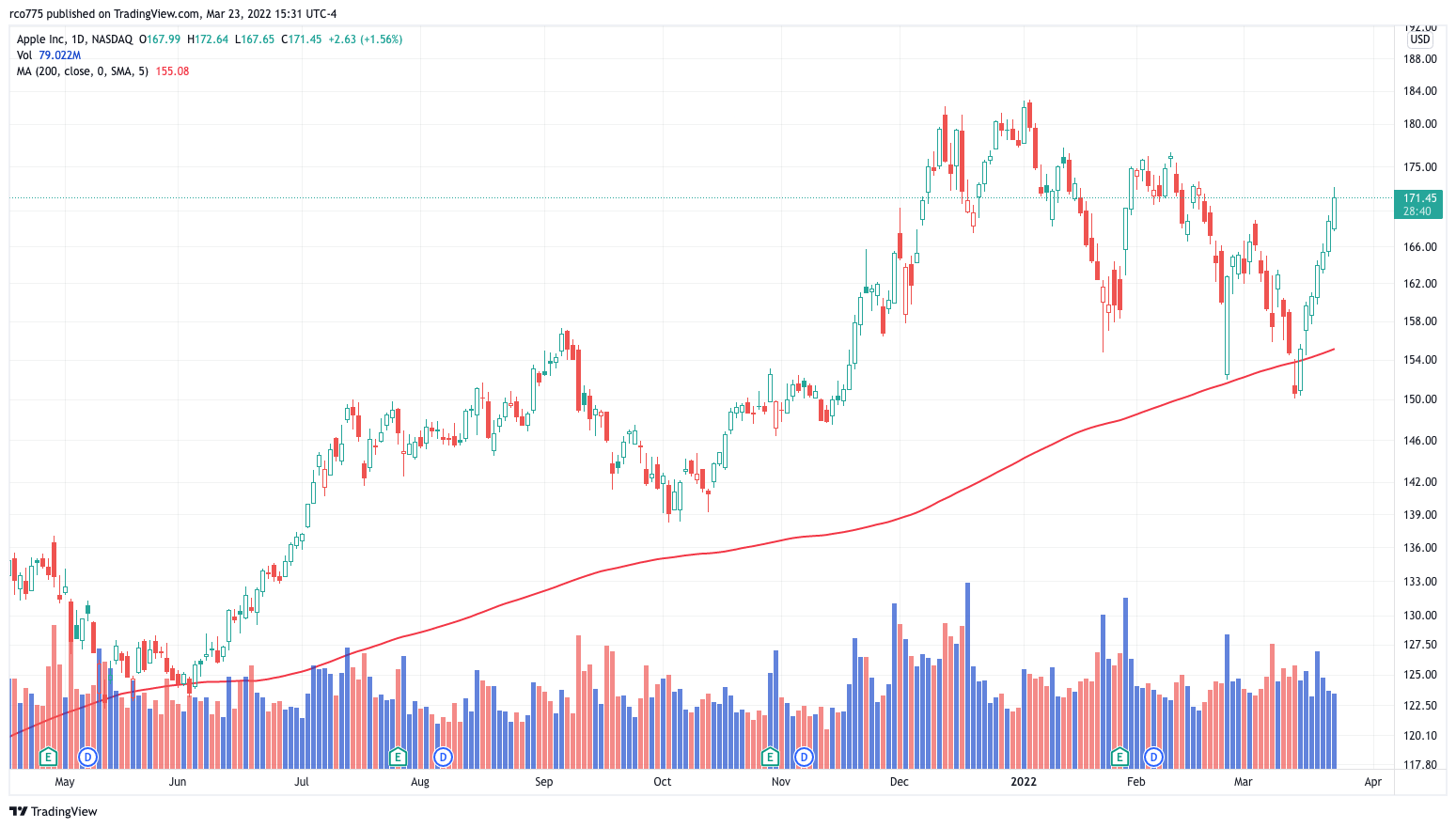 By every academic and professional standard, the safest investment in the world is the 10-year bond issued by the American government. It is considered safer than cash under the mattress, gold sitting in a vault or the recipe for Coca-cola.

The next safest investment? AAPL.

Nothing, however, lasts forever. Except for the eternal city, that is. Newton taught us about gravity, but AAPL can resist physics for a while due to the 20-year love affair from the institutional crowd. But that only means the stock will fall less rapidly than many others in the same situation.

In the end, however, Newton will not be denied, and his eternal law will win out. AAPL is falling from the tree, and this is a long-term drop.

Temptations abound, real intermediate and longer term opportunities much less so, although I am long a couple. If you are like the investors trading in Club Romulus, you probably pulled a lot of your cash out of the market in early January (especially the longer-term stuff), and you’ve been sitting on your hands, until a couple of the opportunities that arrived this past week.

Don’t, however, forget the larger picture. Things happen in the markets that shake people out of a healthy meditative state, throwing them off their game. At the beginning of this year, I commanded all my readers to rid themselves completely of FOMO, the fear of missing out. Continue to purge this harmful trait from your investing life.

Opportunities will ALWAYS exist, even if we must wait a short time for them to present themselves.

I remain, as ALWAYS, grateful for the opportunity to assist on your investing journey. It is an honor to work with you.