WASHINGTON ― President-elect Donald Trump will be flexing America’s muscles against both China and North Korea from almost the moment he sits down in the Oval Office of the White House, at least to judge from his recent tweets.

“China has been taking out massive amounts of money & wealth from the U.S. in totally one-sided trade but won’t help with North Korea,” he said in one infamous tweet. “Nice,” he added in sardonic understatement. 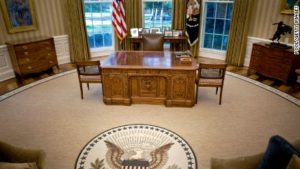 Then, after Kim Jong-Un in his New Year’s address hinted at the imminent launch of an inter-continental missile, Trump fired off another highly quotable tweet. “North Korea just stated that it is in the final stages of developing a nuclear weapon capable of reaching parts of the U.S.,” he observed. “It won’t happen!” Is Trump saying the North does not have the technology to fix a warhead to the tip of a long-range missile ― or that he as president might order a strike on the launch facility before it’s fired?

Either way, these tweets are reminders of another of Trump’s campaign promises ― that he would punish China with protective tariffs for what he sees as unfair practices including currency manipulation that give China a trade surplus with the U.S. of billions of dollars every year. There is, however, a blatant contradiction. How can Trump expect China to “help with North Korea” while blockading China’s exports to the U.S.?

Right, China did sign on to highly strengthened sanctions against North Korea in retaliation for the North’s fifth nuclear test and latest missile tests. The Chinese, however, may be in no mood to enforce sanctions while maintaining close ties to North Korea. China’s President Xi Jinping would be even less likely to bear down on the North if the U.S. were to carry out Trump’s threats of a tariff wall that would deepen the confrontation all around the Chinese periphery.

Probably all that might spare us the agony of an imminent showdown with China on trade is that Trump will be too engrossed in shifting U.S. policy on domestic issues, blocking illegal immigration across the southern U.S. border and tightly screening Muslims coming to the U.S. Before he acts too precipitously on China, Trump may hold out the specter of trade barriers while demanding concessions to reduce the imbalance. One thing is sure ― we may expect relations between Trump and Xi to be quite uncertain.

Trump is likely to be still more perplexed by the standoff with Russia that he’s inheriting from the last gasps of President Obama’s administration. Unlike President Xi, Russia’s President Vladimir Putin has formed special friendships with both Trump and Rex Tillerson, Trump’s appointee as secretary of state, who’s had major dealings with Russia as Exxon boss. Both of them should be inclined to advocate warm and friendly ties with Putin, but other factors may upset U.S.-Russian relations.

The most obvious is the hacking of emails, as claimed by U.S. intelligence agencies. Was Russia really trying to influence the U.S. presidential election? Democrats are convinced the Russians, at Putin’s direction, wanted Trump to defeat Hillary Clinton, who might have gotten quite hard on Russia had she won. Trump, of course, scoffs at such talk as an absurd attempt at rationalizing her defeat. That’s why Putin did not respond in kind to the expulsion of the 35 Russian diplomats and their families, as ordered by Obama. He would prefer to see if Trump, as president, will still give Russia the benefit of the doubt.

While Trump equivocates on Russian hacking, what to do about Russia will be more difficult as the spotlight shifts to countries in which the U.S. and Russia share opposing interests. Putin’s Russia has inflamed tensions in Eastern Europe by taking over portions of Ukraine beginning with Crimea. Russia and Iran supported Syrian President Bashar al-Assad in a terrible campaign against Syrian rebels that cost hundreds of thousands of lives.

Differences are most acute over not only Iran, which Russia sees as an ally, but also North Korea, where Putin is enlarging military and commercial ties in competition with China. Under these circumstances, like China, Russia may not be interested in enforcing sanctions on North Korea despite having voted for them in the U.N. Security Council.

Having befriended Putin in commercial dealings, Trump and Tillerson should know that he’s cold and calculating. Both Russia and China will be probing for weaknesses in a U.S. network of military and diplomatic alliances that Putin and Xi see as challenges to global power.

Donald Kirk has been covering confrontations in Asia for decades. He’s at kirkdon4343@gmail.com.