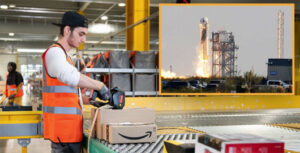 Forlorn Amazon warehouse workers returned to their shifts after enjoying a ten-minute break for the first time in their entire employment today as Bezos rocket disappointingly returned to earth.

The hopeful workers had gathered around televisions in break rooms, saying their prayers and watching in wonderment as Bezos’s rocket went up. They waited with bated breath and hopeful faces — but all their dreams were dashed as the rocket failed to explode in a brilliant, dazzling fireball.

“Maybe next time,” said Jorge Mendez of South El Monte, CA, putting his orange vest back on and returning to his spot on the assembly line. “That guy wasn’t even in space long enough for me to pee!” Mendez’s officially issued shock collar then zapped him for complaining, and he cast his eyes downward and returned to work.

“Back to work, minions!” said Bezos, bursting into one warehouse moments after landing. … Bezos is back, baby!”