RFK Jr. at Lincoln Memorial: ‘We have witnessed over the past 20 months a coup d’etat against democracy’

Robert F. Kennedy Jr. decried Covid tyranny and the censorship of voices like his during a stirring speech at the Lincoln Memorial during Sunday’s Defeat The Mandates rally in Washington, D.C.

“James Madison, John Adams, Thomas Jefferson all said the same thing, we put freedom of speech in the First Amendment because all of the other rights that we were trying to protect relied on that right,” Kennedy said. 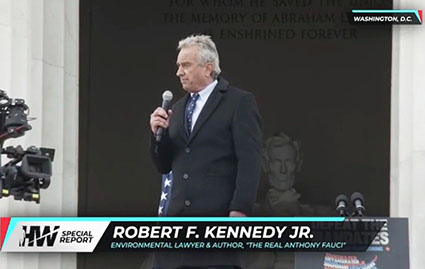 “The minute they hand you that vaccine passport every right that you have is transformed into a privilege contingent upon your obedience to arbitrary government dictates.”

Kennedy pointed to what he refers to as “information chaos”:

“The use, the orchestrated confusion, and fear on manipulating PCR tests and over amplifying them. By changing the metrics on how death certificates are calculated. The complete absence of any good data on case fatality rates or infection fatality rates or all the things that our public health agencies ought to be telling us so that we can individually with our physicians evaluate the risks, treatment, and prophylactic protocols. We weren’t given any of that information. The information we were given was badly, badly manipulated.”

Kennedy noted that those who take the Covid vaccine have a 21 percent increased chance of dying over the next six months.

“They have to give 22,000 vaccines to protect one person from dying from Covid,” he said. “And if you give 22,000 vaccines to prevent one death, you’d better make sure the vaccine doesn’t kill anybody because if it kills one person, you have cancelled out all of the benefits. But as we saw, 21 people died in the vaccine group and only 17 in the placebo group, so where did those excess deaths come from? The answer to that question is heart attacks.”

RFK Jr. also took aim at the critics of the VAERS system which records vaccine adverse reactions and deaths.

“We have witnessed over the past 20 months a coup d’etat against democracy and the demolition, a controlled demolition, of the United States Constitution and the Bill of Rights.”

Anthony Fauci, Covid tyrants, RFK Jr. at Lincoln Memorial: ‘We have witnessed over the past 20 months a coup d’etat against democracy’, Team Biden, WorldTribune.com

RFK Jr. at Lincoln Memorial: ‘We have witnessed over the past 20 months a coup d’etat against democracy’ added by Editor Two on January 24, 2022
View all posts by Editor Two →