Revealed: NYT reporter who wants Trump supporters labeled ‘enemies of the state’ was a CCP-funded columnist

The New York Times reporter who believes Trump supporters should be formally declared “enemies of the state” is a former columnist for an official Chinese state media propaganda organ. 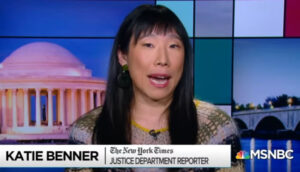 “As Americans, we believe that state power should not be used to work against a political figure or a political party. But what happens if a politician seems to threaten the state? If the politician continues to do so out of office and his entire party supports that threat?”

Conservatives and alternative media figures harshly slammed Benner for the outrageous remarks. “This is a reporter — not an op-ed writer — saying this,” journalist Glenn Greenwald noted. “[T]he fixation on 1/6 is about exactly this: classifying Trump supporters as Enemies of the State for political gain & Security State power.”

It turns out Benner is quite familiar with the workings of security state power cracking down on internal opposition. The Conservative Treehouse website had the damning information on her:

Benner joined the New York Times in 2015 after her initial work at the communist propaganda outlet.

Katie Benner of Bloomberg joining The Times as a technology reporter. She’s covered Wall Street and Silicon Valley. She’s been a magazine writer and a columnist. Early in her career she wrote for Beijing Review, and since last fall, she has been based in San Francisco for Bloomberg View.

Numerous media accounts refer to Benner as having been a “freelancer” for the communist publication. However, a 2012 article she wrote for Fortune includes a bio at the end that states Benner was “a columnist for Beijing Review” before joining Fortune in October 2006.

Robert Terrell, a professor of journalism at New York University, authored a 1986 paper titled “The First 25 Years of the Beijing Review, an official propaganda organ of the Communist Party of the People’s Republic of China.” Terrell wrote:

During the years immediately after the successful completion of the military phase of the Chinese revolution, the nation’s leaders became increasingly aware of a need to develop a regular communications link with the outside world. Therefore, the Communist Party of the People’s Republic of China established the Beijing Review, which has been continuously published since March 4, 1958….

In a manner of speaking, the Beijing Review is a classic “house organ,” a publication distributed by an organization committed to presenting its point of view. But in the case of the Beijing Review, the “house” encompasses one quarter of the planet’s population. And the “organization” which publishes it is probably the largest political party the world has ever known.

“We are not placing any restrictions on what these outlets can publish in the United States; we simply want to ensure that American people, consumers of information can differentiate between news written by a free press and propaganda distributed by the Chinese Communist Party itself. Not the same thing,” Pompeo said of the move.

Conservative Treehouse observed that the New York Times’ in-house communist propaganda alumnus has a very American-sounding name. Katie Benner grew up in Vermont. Yet she ended up living in China and writing for a communist house organ. How does that happen?

Geostrategy-Direct.com, a WorldTribune affiliate, explained this facet of China’s “United Front” apparatus in its coverage of a 2019 report released by a working group convened by the Hoover Institution and the Asia Society titled “China’s Influence and American Interests” (bold added):

To achieve its goals, China “leverages its own citizens abroad – especially those in academia, whether faculty or students – and members of the Chinese diaspora, whom it considers ‘fellow countrymen’ who owe loyalty to the ‘Chinese motherland,’ ” the report said. “Already, many Chinese students do not feel free to speak candidly in American classrooms; Chinese experts self-censor so that they can obtain visas to return home; and most Chinese-language media in the US now reflect a China-friendly line.”

As FBI Director Christopher Wray put it, China’s influence operations demand a “whole-of-society response” – one that, the report said, “should emphasize ‘constructive vigilance.’ U.S. universities, think tanks, media, associations, and local governments must demand transparency in their dealings with prospective Chinese partners, including full disclosure of any ties they have” to the Chinese state, the Communist Party, or the military.

Mike Pompeo warned Americans last fall about the need to “differentiate” between news and propaganda dressed up as such by a communist superpower. Such vigilance must also be applied when dealing with U.S. establishment media organs that employ communist alumni as part of their nefarious loaded agenda.

Revealed: NYT reporter who wants Trump supporters labeled ‘enemies of the state’ was a CCP-funded columnist added by WorldTribume on July 29, 2021
View all posts by WorldTribume →