Researcher: Holy Family’s journey through Egypt should be celebrated, could boost tourism

The history of the Virgin Mary, baby Jesus and Joseph’s travels through Egypt should be a major event celebrated by all Egyptians, a researcher in Coptic history said.

It could also be a boon to Egypt’s struggling tourism industry, said Robert Al-Faress. 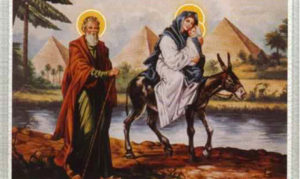 “The journey of the Holy Family to Egypt is never properly celebrated – and here I am not talking about the religious side of it but I am particularly talking about the cultural and historic aspects,” Al-Faress said.

“For the most part, Egyptians know that the Holy Family took refuge to Egypt from the tyranny of Herod, but that is about it.”

The Holy Family spent about four years in Egypt after fleeing Jerusalem, according to historians.

Their trip began in the Sinai at Al-Farma, on the border with Gaza and ended in Durnaka, Assiut, venue of the famous Monastery where the feast of Virgin Mary is celebrated in August each year.

The sight of the Abu Serga Church is said to have been the spot where the Holy Family rested towards the end of its journey through Egypt.

“Most people – and I mean by most people, Egyptians at large and not just Copts but Muslims too – would join the Moulids of Aladrah (Feast of Virgin Mary) in Assiut, not just because this was the last spot of the journey of the Holy Family,” Al-Faress said.

“This is part and parcel of the overall elimination of the Coptic history which is not featuring anywhere seriously in the collective Egyptian consciousness of the post-1952 Revolution.”

Al-Faress noted that because the Holy Family’s journey “is perceived as a Coptic rather than an Egyptian event” it has not entered the Egyptian cultural consciousness, which is unfortunate in that “it could have prompted so many events and considerable tourism for the 22 spots where the Virgin Mary and baby Jesus had stopped.”

In 2014, then minister of tourism Hesham Zaazouaa, following a visit with Pope Tawdros, had pledged to place the locations of the Holy Family’s trip on the summer tourism itinerary. However, it never materialized, in part because of the decline in tourism according to one source at the Ministry of Tourism.

“This might be part of the reason, but in fact, this promise had been made before and was never fulfilled – and the fact that it was made to the Coptic Patriarch is precisely the evidence to what I am saying: the matter is looked at as part of the Coptic history which is simply overlooked,” Al-Faress said.

Al-Faress said the average non-Coptic Egyptian knows almost nothing about the history of Copts prior to the Arab Conquest of Egypt.

“Copts know a great deal about Islam and Islamic feasts and fasts but not the other way round – this is because of education and media guidelines,” he said.

Al-Faress noted that President Abdul Fatah Sisi has made an effort to “send reassuring signals to Copts” in Egypt, including the president’s participation in the Coptic Christmas Mass, but the journey of the Holy Family has been kept in cultural isolation.

“In Minya, every year, the Bishop of Malawi marks the trip by inviting a group of intellectuals and foreign diplomats to a Nile trip on traditional boats whose sail carry the drawings of the Holy Family to recreate part of the blessed journey where by the Virgin Mary, baby Jesus and Joseph moved by land and by the Nile. Not once was this event given any serious media coverage – if at all,” he said.

“We have nothing to remind the public of the Holy Family’s journey; there are pictures at churches and monasteries but those are for the church goers – as for the rest of the public there is only the two-hour event of Abou Serga Church that barely gets any coverage,” Al-Farres concluded.