The Asheville Tribune published a letter from county GOP chair Carl Mumpower to Asheville City Schools Superintendent Denise Patterson in which Mumpower notes: “Over the past year, we have received a number of complaints regarding discrimination toward city students operating from a traditional, conservative and/or Christian value system. The majority of these exposures track to Asheville High and the SILSA (School of Inquiry and Life Sciences) program.” 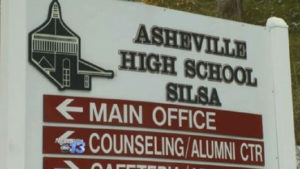 In the letter dated March 13, Mumpower writes: “Some of the specifics include personal ridicule, mockery, shaming, exposure to liberal teacher bias and presentations on subject matter of a sexual or otherwise personal and uncomfortable nature. Persistently, the students/parents voiced a fear of raising concerns to authorities.”

In a March 14 report, WorldTribune.com noted that some parents of Asheville students were critical of alleged liberal bias in the school system.

Related: What students are being taught in Asheville, NC public schools, March 14, 2018

In his letter to the superintendent, Mumpower noted Asheville High School’s “recent support for student engagement/leadership in the women’s march; the anti-gun rally; an art assembly involving mandatory participation in a lecture on transgenderism; and a subsequent forced viewership of a pro-LBGTQ agenda video has prompted us to reach out to you directly. In each of these cases, the agenda demonstrates a dominating liberal political agenda highlighting complaints that Asheville High is not a safe place for students with differing views.”

“We have arranged for the UNC-A College Republican’s Club to serve as potential mentors for conservative minded students at Asheville High and would appreciate your help in creating a safe and functional bridge to help actualize that support system.

“We would like to explore opportunities for expanding the opportunities for conservative-minded students at Asheville High to cultivate, express and otherwise explore their value system within the parameters of the school’s stated mission and guidelines.

“We would appreciate your help in identifying a safe process for students and/or parents to address their concerns about bias or abuse without fear of being stigmatized, penalized or otherwise mistreated by the administration, teachers or students within the system.

Mumpower cited the Asheville school system’s mission statement, which reads: “The board acknowledges the dignity and worth of all students and employees and strives to create a safe, orderly, caring and inviting school environment to facilitate student learning and achievement. The board will not tolerate any form of unlawful discrimination, harassment or bullying in any of its educational or employment activities.”

Mumpower wrote that “liberal institutional bias and tolerated discrimination by the Asheville City School system is affirmed by the absence of essentially any on-campus conservative oriented activities.”