Not only did the U.S. Department of Defense know who the Kabul airport bomber was and when the attack would occur, but a U.S. drone had a lock on the terrorist who carried out the bombing, a former U.S. assistant secretary of defense said. 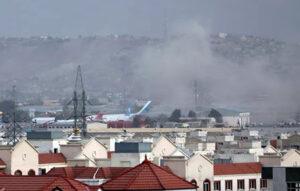 In an interview on Univision Noticias, Roger Pardo-Maurer, the former U.S. Deputy Assistant Secretary of Defense for Western Hemisphere Affairs (2001-2006), said that a U.S. Predator drone locked on the bomber, but that Team Biden refused to grant permission to take him out.

“[Permission] was requested and was denied,” he said.

Why? “Because we are in this process of negotiating with the Taliban who aren’t even in control of their own government or their own people,” Pardo-Maurer said.

The bombing killed 13 U.S. military personnel and more than 100 Afghans.

Two questions everyone should be asking right now:
– For how long in advance did we have eyes on the Kabul bomber *prior* to his arrival at HKIA?
– Who issued the stand down order to the Predator drone operator that had a lock on the Kabul bomber? https://t.co/KvbxI5t8X2