Four conferences focusing on the threat of Islam were canceled last week after the safety of attendees was threatened by Antifa groups, a report said.

The conferences “sought to expose how leftists supported by George Soros, the John Templeton Foundation and other donors are intimidating America into silence by labeling anyone who exposes them as ‘racists,’ ‘Islamophobes’ and ‘white supremacists,’ ” The Daily Caller reported on April 12. 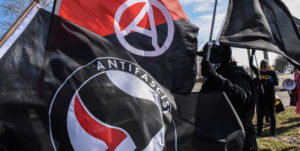 “Antifa groups used information from the Southern Poverty Law Center (SPLC) to successfully shut down” the conferences which had been scheduled in Wisconsin and Minnesota, the report said.

“The hotels slated for the events were flooded with threatening calls, and the organizers voluntarily canceled one of the events following numerous warnings that it would not be safe. A fifth conference in Des Moines, Iowa carried on in defiance, despite leftists showing up to disrupt the proceedings,” the report said.

Worldview Weekend, a conservative Christian organization that produces radio and TV shows and sponsors events nationwide, was host of the scheduled conferences.

“The SPLC posted the locations for these venues, after which Antifa groups urged their members through social media to attend events and swamp the venues with threatening calls and messages,” the Daily Caller report said.

“With the financial losses from other canceled events, Howse said they could not afford to provide more security than those already hired, and canceled that last event out of safety concerns,” the report said.

Howse told The Daily Caller: “This is a public service provided to American citizens because we are concerned for the future of America. We pay the costs for renting the facilities, advertising the events in local markets, printing flyers, bringing in speakers — including airfare, car rental, hotel, speaker fees and other expenses — and charge nothing for the events. We do try to recoup some of these costs through book sales and voluntary donations, but it is never enough.”

According to Howse, a combined total of at least 3,500 people had registered for the four canceled events: more than 1,500 in Minneapolis and another 2,500 in the three Wisconsin sites. The cancellation of these events cost well over $60,000, Howse said.

One of the conference speakers, John Guandolo, is listed on an SPLC list of “anti-Muslim extremists.”

Guandolo, president and founder of Understanding the Threat, is a Naval Academy graduate, a combat veteran Marine officer, a former FBI special agent who created the first government trainings on the Muslim Brotherhood and its U.S. operations, and was recruited by the Department of Defense to provide strategic analysis regarding these threats.

“I teach and train about the things that energize the jihadis (Sharia), and the networks that support jihad and the jihadis,” Guandolo said. “This is primarily the Muslim Brotherhood, of which CAIR, an unindicted co-conspirator in the Holy Land Foundation terror financing trial, is a prominent part. The Muslims themselves say they are motivated by Sharia (Islamic law).”