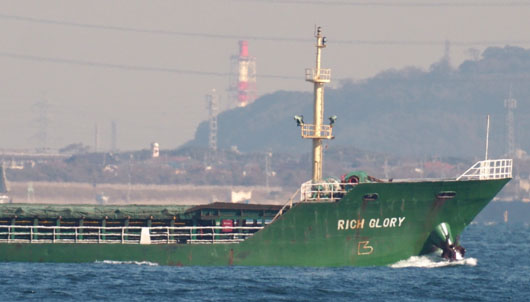 Under UN Resolution 2371, North Korea is banned from exporting minerals, including coal.

South Korea’s government said it has opened an investigation into private importers of the North’s coal.

The ships, one Panama-registered and one Sierra Leone-registered, have each entered South Korean ports at least once in the past two months, the VOA report said.

VOA, citing Marine Traffic that provides real-time information on the movements of ships, said that the automatic identification system of the Sierra Leone-registered Rich Glory was detected in the port of Busan at 11:58 a.m. on July 4.

The Rich Glory has visited South Korean ports at least 16 times over the past nine months without any restraints from the Seoul government and is currently navigating in Japanese waters, VOA noted.

The Panama-registered Sky Angel entered the port of Ulsan, near Busan, on June 14. In all, the Sky Angel was found to have visited South Korean ports at least six more times until recently, the report said.

The VOA report noted that China may have played a role in the illegal shipment of North Korean coal to South Korea via Russia last year, saying the two ships were run by Chinese companies.

Meanwhile, a Togo-registered ship, which has been interned by South Korean authorities since January for its involvement in the shipment of North Korean coal, was found to be owned by a Chinese company with an address in Hong Kong, the VOA said.