There is still no conclusive evidence of the effectiveness of face masks to prevent covid to warrant mask mandates.

There is evidence, however, that discarded masks are winding up in the world’s oceans, polluting the water and directly contributing to the killing of marine wildlife. 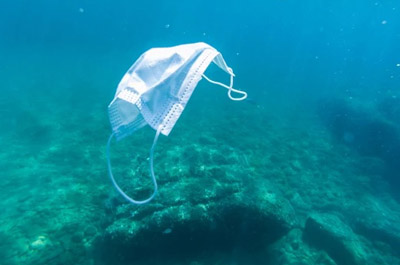 Over 1.5 billion masks produced in 2020 will pollute the world’s oceans, according to a report published by a Hong Kong-based environmental group.

OceansAsia said in its December 2020 report that the discarded masks will both contaminate oceans with plastic and harm already vulnerable marine wildlife.

“Single-use face masks are made from a variety of meltblown plastics and are difficult to recycle due to both composition and risk of contamination and infection,” OceansAsia’s report states. “These masks enter our oceans when they are littered or otherwise improperly discarded, when waste management systems are inadequate or non-existent, or when these systems become overwhelmed due to increased volumes of waste.”

With each mask weighing three to four grams, the situation could lead to 6,800-plus tons of plastic pollution that “will take as long as 450 years to break down,” according to the report.

“This plastic does not ‘go away,’ but rather accumulates, breaking up into smaller and smaller pieces. Annually, it is estimated that marine plastic pollution kills 100,000 marine mammals and turtles, over a million seabirds, and even greater numbers of fish, invertebrates, and other marine life,” the report says.

In addition to the harmful effects of micro-plastic and nano-plastic particles, elastic ear loops pose a “possible entanglement risk for wildlife,” the report says.

The report cites several examples of marine animals killed by masks, including a “dead bloated pufferfish” found tangled in the loops of a disposable blue mask by volunteers cleaning a Miami beach in August.

In addition, a necropsy on a malnourished penguin found dead on a beach in Brazil in September reportedly found a mask wadded up in its stomach.

The report added: “Plastic pollution also profoundly impacts coastal communities, fisheries, and economies. Conservative estimates suggest that it could cost the global economy $13 billion USD per year, and lead to a 1-5% decline in ecosystem services, at a value of between $500 to $2,500 billion USD.”