UNITED NATIONS — Words cannot begin to describe the devastation and suffering which has befallen Syria, now in its fifth year of civil war.

Upon his return from the ravaged country, the UN’s Humanitarian chief, Stephen O’Brien, solemnly told the UN Security Council, “I have run out of words to fully explain how the actions of the parties to the conflict have led to the devastation of a country and its people.”

In short, despite a still flickering cease-fire and localized humanitarian success and access, Syria has descended into an appalling level of violence where civilians and combatants alike, where women and children, and both government and militant opposition forces, have entered into the labyrinth of Hell which has no apparent exit.

We know the gruesome imagery only too well; the rumble of endless bombardment, the regime launched aerial barrel bombs, the ISIL and Al-Nusra car bombs, the refugees, the dislocated and the dismembered all part of the grim calculus of rising causalities likely near 500,000 killed. 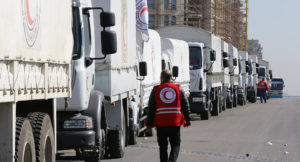 A Security Council statement on Syria reaffirmed the primary responsibility of the Syrian government to protect its civilian population, adding that all parties to the conflict should ensure safety of civilians. Significantly the Council added: “The members of the Security Council condemned increased terrorist attacks …carried out by ISIL (Islamic State in Iraq and the Levant) also known as Da’esh, Al Nusra Front,” and other terrorists associated with Al Qaida.

And so now in 2016, the UN’s O’Brien speaks of both sides using medieval style siege tactics, “The continued use of siege and starvation as a weapon of war is reprehensible.” He then outlined the nearly 600,000 people who are besieged, mostly by the Assad regime, throughout the country. He also condemned ISIL for employing the same tactic which essentially cuts off food, often water, and usually humanitarian and medical supplies.

In addition, over 4 million Syrians are receiving international humanitarian aid.

O’Brien stressed, “The punishment of civilians through besiegement tactics must stop immediately.” He underscored the complex humanitarian network and supply plans to besieged towns as well as accessible areas throughout the country where the UN has aided millions monthly. Yet in place like Aleppo, the situation remains “alarming.”

There’s an often delicate give and take negotiation between UN relief agencies and local authorities, be they the Syrian government, a maze of militias or the ISIL and Al-Nusra terrorists.

In all cases endless permissions even for medical and food access need to be secured only then to often be blocked at the last minute for unexplained reasons.

As Under Secretary General O’Brien added caustically, “We can’t ignore the fact that many on all sides are profiting handsomely at the expense of innocent civilians from controlling the goods which enter through irregular and unofficial channels.”

He underscored, “Protecting civilians and granting access should never be dependent on political negotiations or as a bargaining chip for ad hoc deals on the ground. These are fundamental tenets of international humanitarian law.”

Western states have called for humanitarian airdrops to besieged towns.

Syria’s UN Ambassador countered, “Suffering is not a political tool,” and went on to claim that neighboring Turkey has used humanitarian corridors as transit areas “for thousands of foreign fighters.”

There’s growing regional concern over Turkey’s role in the Syrian civil war. Though Turkey has borne the humanitarian burden of over two million Syrian refugees, at the same time, the Ankara government has allowed a network of human traffickers to send a steady stream of migrants into Greece and subsequently the European Union with Germany as the ultimate destination.

Turkey’s increasingly authoritarian government under President Recep Tayyip Erdogan, through having made a deal with the EU to stop the migrant flow, has at the same time, has allowed Turkish territory to serve as a clandestine pipeline for radicalized Islamic foreign fighters entering Syria.

Despite the UN’s commitment to hosting a “Syrian-led and Syrian-owned political transition” in Geneva, the parties to the conflict, both the Assad regime and a gaggle of Islamic militant factions beyond ISIL, remain at loggerheads and not likely to reach a political compromise.

Given that France holds the Security Council presidency for June, it’s time for diplomats to reenergize and redouble their efforts to end this bloody conflict. We are beyond sanctimonious platitudes and dulling despair.

The time has come for creative and focused diplomacy to finally pull this ancient land back from its modern dystopia and to Solve Syria Now.

John Metzler, Syria: ‘Layrinth of Hell which has no apparent exit’, WorldTribune.com