Report: It’s week 4, and the ‘soft coup’ against Trump administration is in progress

It’s the middle of February and the soft coup against the Trump administration continues.

A “soft coup” is a coordinated effort to delegitimize or undermine a lawfully elected official. 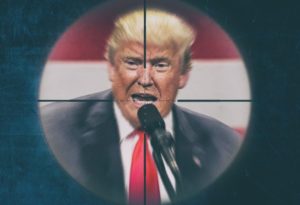 Taken from the French phrase “coup d’état,” which translates to a strike at the State — a coup may be violent or not. In the latter case, it is a “soft coup.” Traditionally, soft coups are the stuff of Latin American political conspiracy theories and paperback novels.

Soft coups include actions of senior government officials refusing to carry out their roles in critical tasks, or otherwise acting in opposition to the letter or spirit of the law to diminish or remove de facto power from those who would otherwise legally wield it.

That’s interesting – isn’t it? Any recent circumstances like that? Can you foresee any on the horizon?

In 2017, propaganda is a powerful tool for shaping public opinion. Politicized news media can be complicit in the scheme of the soft coup by engaging in false and misleading reporting, or acting as the propaganda arm of the political opposition.

Suppose the news media advanced a false narrative to sensationalize and controversialize a government official. What about unsourced whispering campaigns?

Sound familiar? It should. It’s time to ask yourself some questions:

Anonymous sources can be important and used legitimately – but not exclusively. After all, one might think you’re just making things up to advance your own agenda.

What about claims of files, dossiers and secret meetings? Have they eventually been discredited or exposed as false?

Have you detected a new and sudden fervor in aggressive interviewing styles from talking heads who otherwise were cheerfully complacent, or busy acting as stenographers?

Do you see certain words and expressions repeated in reporting? How many times have you seen the words “chaos” or “chaotic” used by different reporters in any number of news stories.

Assuming use of that particular term is factually correct – and that’s quite an assumption – one would think news editors might use a thesaurus. That assumes anyone still knows what a thesaurus is, correct?

I teach as an adjunct in the journalism program at George Mason University. One of the points I stress to my students is that they – as journalists – do NOT want to become THE story. They are reporting the story. If the publics’ attention turns to them and their conduct – something is very wrong. Guess what? Something is very wrong.

Joe Mathewson is a former Supreme Court reporter for the Wall Street Journal. He now teaches at the Medill School of Journalism at Northwestern University. I use his textbook, “Law and Ethics for Today’s Journalist” in my classes. Paperback, it’s only about $30.

The Society of Professional Journalists has a Code of Ethics. Before our highly-politicized news media slides into complete irrelevancy, I strongly advise reporters and editors to pause; evaluate their reporting; understand what’s going on in their news room; set aside their personal biases; reinvigorate their journalistic standards; and, then get back to reporting facts.

and the ‘soft coup’ against Trump administration is in progress, Report: It’s week 4