Report: It’s election boards, not the USPS, that are ill-prepared for first-ever mass-mail voting

Under fire from Democrats who question its readiness for 2020 mail-in voting, the USPS inspector general said in a report this week that local election boards opted to use excess envelopes, minus bar codes, making it impossible to track the ballot applications or ballots. 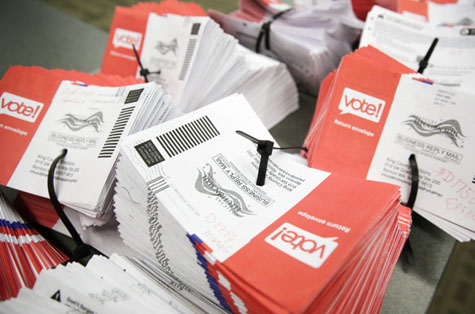 In 2018, 31 million ballots were cast by mail. Only 4 million, or 13 percent, used mail tracking technology, the USPS inspector general said.

Public Interest Legal Foundation spokesman Logan Churchwell told The Washington Times: “The postal service is correct to note that recipient addresses are out of date. For years, we’ve raised alarm about bloated and outdated voter registration records that, if used as the foundation for a mail ballot election, could be catastrophic. Just like ‘going to war with the army you have,’ we’re doing the same with voter addresses. In 2020, dead people and those holding duplicated registrations will get ballots.”

USPS also has also been urging canvassing boards to ensure they have the correct addresses for voters to avoid huge numbers of ballots being returned unopened.

Other problems the inspector general found:

• Boards are using envelopes that can cause the ballot to be sent back to the voter instead of counted because they contain two addresses.
• Boards are planning on sending ballots too close to election day for carriers to meet state deadlines. Officials should mail ballots at least 15 days before Nov. 3, yet 48 states let voters request absentee ballots inside that time span.
• There is a muddle of different requirements for postmarks. Nearly 30 states have no requirement. The other states have different dates for when the ballot can be counted.
• States have no consistent policies for updating voter lists. “This can cause absentee ballots intended for voters to be returned to election officials as undeliverable,” the IG said.

“Such was the case in Nevada, where Democrats quickly shifted to an all-mail election and sent hundreds of thousands of ballots off voters lists even if not requested,” Washington Times reporter Rowan Scarborough noted.

Adams said developing a workable mass-mail election takes time. States are now trying to cram a totally new system into a few months planning time because of the COVID-19 pandemic.

“New proponents of mail balloting don’t often understand how it actually works,” Adams said. “States like Oregon and Washington spent many years building their mail voting systems and are notably aggressive with voter list maintenance efforts. Pride in their own systems does not somehow transfer across state lines. Nevada, New York, and others are not and will not be ready for November.”