Israel and Egypt have become “secret allies” in an effort to drive Islamic State-affiliated terrorists out of North Sinai, a report said. 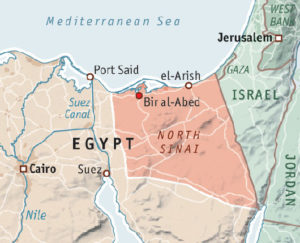 Israel, with the blessing of Egyptian President Abdul Fatah Sisi, has used drones, jets, and helicopters in Sinai to target jihadists in more than 100 airstrikes over the past two years, The New York Times reported on Feb. 3.

“Once enemies in three wars, then antagonists in an uneasy peace, Egypt and Israel are now secret allies in a covert war against a common foe,” the Times said.

Israel began the airstrikes after a Russian plane was shot down by terrorists over Sinai in October 2014, the report said.

The report noted that the Israeli drones used in the operations are unmarked while the helicopters and fighter jets cover their markings.

The secret alliance is known to only a select group of military and intelligence officials, the report said.

Egypt’s and Israel’s “collaboration in the North Sinai is the most dramatic evidence yet of a quiet reconfiguration of the politics of the region,” the Times report said. “Shared enemies like ISIS, Iran and political Islam have quietly brought the leaders of several Arab states into growing alignment with Israel – even as their officials and news media continue to vilify the Jewish state in public.”

The report noted that Israel had also complained to the U.S. that Egypt was not upholding its end of the deal in North Sinai. For that reason, Prime Minister Benjamin Netanyahu “scoffed at the idea” proposed by then-Secretary of State John Kerry in which Egypt and Jordan would help guarantee Israeli security in return for Israel’s relinquishing territory for the establishment of a Palestinian state.

“Israel’s military was already propping up Egypt’s military, he said, according to the Americans. If Egypt was unable to control the ground within its own borders, Mr. Netanyahu argued, it was hardly in a position to guarantee security for Israel,” the Times said.