Google is trying to convince users that Hillary Clinton’s health is not a trending issue – even though it is.

A reporter for the New York Times who writes about tech issues called on Google to “fix” the search results that might be damaging to the campaign of Clinton, who turns 69 in October. 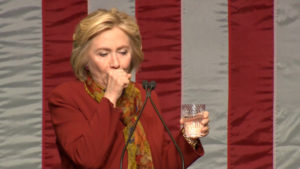 The same search on Yahoo and Bing display results on the actual trending issue of the Democratic presidential candidate’s health.

The scrubbing of the trending topic is no surprise to many observers considering Google “donated between $500,000-$1 million to the Clinton Foundation in recent years,” according to Politico.

Yahoo and Microsoft do not appear on the list of media organizations that contributed to the foundation.

Former New York Mayor Rudy Giuliani recently said on Fox News that people can go online and enter “Hillary Clinton illness, and take a look at the videos yourself.”

The issue of Google’s censorship even sparked its own viral hashtag – #HillaryClintonSearchTerms – which was trending on Twitter on Aug. 27.

According to InfoWars, Google “had previously been called out for changing its algorithm to censor search engine suggestions for people looking for information regarding the multiple mysterious deaths tied to Hillary, known popularly as the ‘Clinton body count.’ ”

“While Google may not be outright censoring the information (people can still search for ‘clinton body count’), the fact that the term does not auto-complete clearly suggests that the company has altered its algorithm to clean up ‘conspiracy theories’ about Hillary,” wrote Paul Joseph Watson.