The FBI admitted it has an “ongoing” relationship with the South Poverty Law Center (SPLC), the leftist organization which often places conservatives on its list of “hate groups,” a report said. 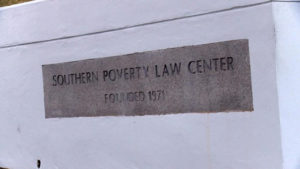 “The SPLC has repeatedly been allowed to brief the FBI on alleged domestic terrorist threats to this country,” Fox News host Tucker Carlson reported on July 27. “Disturbingly though, the relationship is ongoing, if you can believe it.”

Carlson said that “if you’ve been paying any attention at all, the Southern Poverty Law Center is a fraudulent enterprise. It’s a left-wing political group that uses ‘hate crime’ designations to target its ideological enemies and to crush people.”

FBI spokeswoman Jacqueline Maguire said in a statement to Carlson’s show: “For many years, the FBI has engaged with various organizations, both formally and informally. Such outreach is a critical component of the FBI’s mission, and we welcome information from these organizations on any possible violations of civil rights, hate crimes, or other potential crimes or threats.”

The SPLC also has working partnerships with Twitter, Facebook, Amazon and Google in which the tech companies consult the SPLC in policing their platforms for “hate speech” or “hate groups.”

The Daily Caller noted that the SPLC’s lists of “extremists” and “hate groups” have “consistently courted controversy and the nonprofit’s work has been plagued by inaccuracies.”

Examples cited by the Daily Caller include:

In August 2017, Ali criticized Apple CEO Tim Cook for donating to the SPLC, which she described as “an organization that has lost its way, smearing people who are fighting for liberty and turning a blind eye to an ideology and political movement that has much in common with Nazism.”

Department of Justice spokeswoman Sarah Isgur Flores told Fox News that “The Attorney General has directed the FBI to re-evaluate their relationships with groups like this to ensure the FBI does not partner with any group that discriminates.”