Report: Democrats to outspend Republicans for midterms with outside help

Democrats are projected to spend $2.5 billion on the midterms, compared to $2.2 billion for Republicans. If the projection holds, it would be the first time in 10 years Democrats have outspent the GOP, a report said. 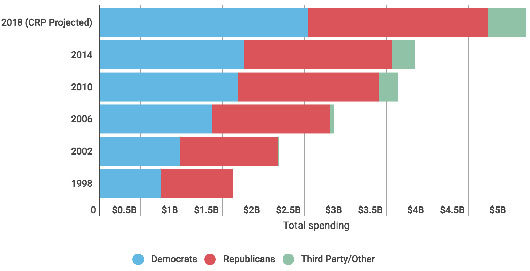 As of Oct. 17, Democrats had poured $1 billion into the 2018 midterms elections, compared to $720 million for Republicans, according to a report by the Center for Responsive Politics.

“We expected to see the numbers climb, as they typically do, but the astonishing spike in campaign donations is a solid indicator of the intensity driving this year’s campaigns,” said Sheila Krumholz, executive director of the Center for Responsive Politics.

The Center’s report added that spending by outside groups will be the highest ever for a midterm election.

“Republicans are leading in the outside money department, having benefited from approximately $343 million in outside spending compared to $248 million for Democrats. More than $628 million has been spent by outside groups so far, compared to $421 million at this point in 2014,” the report said.