The consulting firm Verisk Maplecroft compiled a Crime Rate Index for calendar year 2016, and Mexico is ranked the third most dangerous country in the world.

Verisk Maplecroft describes itself on its website as “a leading global risk analytics, research and strategic forecasting company offering an unparalleled portfolio of risk solutions.” 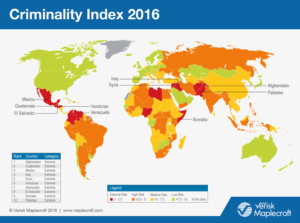 Here is the firm’s Top Ten Most Dangerous Countries list, with #1 as the most dangerous country in the world, #2 as the second most dangerous, and so on:

Verisk Maplecroft classifies all ten of these countries as “Extreme Risk” countries.

Note that, in the Top Ten Most Dangerous List, five are in the Middle East and five are in Latin America.

The firm considers Mexico, at #3, as more dangerous than Iraq, at #4. I personally resided for much of my life in Mexico, and I also resided in Iraq for most of 2005, on a tour of duty with the U.S. Army National Guard.

The Iraqi military is currently in a conflict with the Islamic State, while Syria is embroiled in a civil war with various factions (including the Islamic State). And yet, these two Middle Eastern countries were ranked as a little less dangerous than Mexico.

As I reported several weeks ago, the murder rate in Mexico has been increasing the past few years. (See Mexico’s murder rate spike in 2016.)

According to the explanation on the firm’s website: “In Mexico and Central America, Verisk Maplecroft identifies the prevalence of DTOs as the major driver of crime, which is estimated to cost these countries up to $200bn a year. The widespread presence of DTOs has spurred some of the world’s highest levels of violent crime, as groups vie for territory and control of drug transport routes to consumers in developed economies.”

The part about “consumers in developed economies” of course refers principally to drug buyers in the United States who are the financiers of the Mexican drug trafficking organizations.

These DTOs are expanding and diversifying their operations. According to Verisk Maplecroft, “The recent rise in the production of methamphetamines in Central America also indicates that groups are extending their production networks beyond traditional locations like Mexico and the US. In addition, these groups are involved with kidnappings, extortion and robbery – the burden of which is passed on to businesses through increased security and insurance costs and lost productivity.”

Verisk Maplecroft says of Mexico, that “Nowhere is this more visible than in Latin America’s second largest economy, Mexico (ranked 3rd), where the cost of violence was estimated at $134bn in 2015. The country’s homicide rate of 17 per 100,000 inhabitants in 2015 places it in the top 25 in the world, while there have been over 26,000 enforced disappearances since 2007. The overwhelming proportion of crime in Mexico is focused within the highly lucrative drugs trade, which has also had serious consequences for the rule of law, due to the coercion of the government, the judiciary and local police forces by the powerful DTOs.”

According to Grant Sunderland, a Verisk Maplecroft Mexico Analyst, “President [Enrique] Peña Nieto’s early security gains have unwound and homicide rates have once again begun rising. With the security forces facing budget cuts, a deterioration in the overall security environment is likely, leaving investors exposed to risks such as extortion, theft and potentially the kidnapping of personnel.”

Regarding Latin American in general, Verisk Maplecroft describes the situation thusly: “Latin America has been named as the world’s highest risk region for violent crime, due to the widespread prevalence of drug trafficking organizations (DTOs), kidnapping, extortion and robbery across 11 countries, including in its four largest economies, Brazil, Mexico, Argentina and Colombia…. Weak political institutions, widespread drug trafficking and ineffective police and security forces see conflict stricken Afghanistan topping Verisk Maplecroft’s Criminality Index. However, as home to six of the 13 countries rated ‘extreme risk,’ Latin America ranks as the world’s highest risk region, ahead of South Asia and West Africa.”

Let’s hope that, in 2017, Mexico and all these countries will see a decrease in violence and crime.