Nikolas Cruz was transferred between schools six times in three years for a string of disciplinary incidents, but he could not be legally expelled, a report said.

Under federal law, the Parkland, Florida shooter had a right to a “free and appropriate” education at a public school near his place of residence, the Miami Herald reported on Feb. 20. 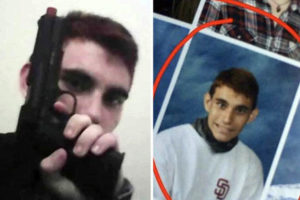 “Every student in Broward County is entitled to a free and appropriate education. If there are certain areas where that can’t be done, we need to make sure those students are given a place that is the least restrictive environment for their ability and they can thrive,” Broward School Board chair Nora Rupert told the Herald. “You also want everybody to have safety.”

The report noted that Cruz in 2014 was transferred to an alternative school for children with emotional and behavioral disabilities but was returned to “a traditional neighborhood school,” Marjory Stoneman Douglas High School, two years later.

Cruz was transferred out of Douglas High a year later for disciplinary violations and then spent time at three other alternative placement facilities, school records obtained by the Miami Herald show.

“At times, Nikolas Cruz’s behavior could be a school administrator’s nightmare: Teachers and other students said he kicked doors, cursed at teachers, fought with and threatened classmates and brought a backpack with bullets to school. He collected a string of discipline for profanity, disobedience, insubordination, and disruption,” Herald reporters Carol Marbin Miller and Kyra Gurney noted.

The Herald obtained Cruz’s disciplinary reports which show that “at Westglades Middle School, which he attended in 2013, he’d been cited numerous times for disrupting class, unruly behavior, insulting or profane language, profanity toward staff, disobedience and other rules violations.”

“Records show the behaviors continued at Marjory Stoneman Douglas, which he attended in 2016 and 2017 before being transferred, with discipline being dispensed for fighting, profanity, and an ‘assault.’ It appears the Jan. 19, 2017 assault resulted in a referral for a ‘threat assessment.’ A few months later, Cruz landed at an Off Campus Learning Center, where he remained for only about five months.”

“You can’t just kick kids out of the public schools because you are afraid of them, or because they are hard to educate,” Stephanie Langer, a Miami special education lawyer and advocate, told the Herald. “It has to be a balance, and I think it’s a really hard one.”