Kenya’s taxpayers are footing the bill as the nation hosts some 5,000 Chinese nationals who are working on the Standard Gauge Railway, a project of China’s “One Belt, One Road” initiative, a report said. 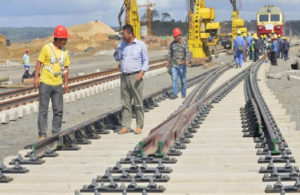 The fact that the project enjoys top Kenyan government support “has also scared immigration officers from doing their jobs given that they fear being highlighted as those frustrating the project in what has seen the Chinese staff dubbed ‘untouchables’ among immigration officials,” The Sunday Standard reported on July 15.

Among this massive workforce of Chinese nationals are civil and structural engineers, accountants, dieticians, cooks, self-taught locomotive operators as well as welders and carpenters, the report said.

Some engineers on the project “have certificates showing that they studied engineering courses at home through a self-study program, raising questions of the quality of skills imported in the country,” the report said.

The Chinese workforce is also exempted from the 400,000 Kenyan shilling ($4,000 U.S.) work permit fee required for expatriates. “This means the government has foregone revenue amounting to almost 2 billion shillings (about $20 million) to facilitate the entry of Chinese staff working on the railway,” the report said.

Late as last month, another batch of Chinese workers “were looking for work permits to be allowed to join their colleagues” in operating the Nairobi-Mombasa railway, the report said.

Additionally, a core team of Chinese executives working on the project in Nairobi’s Lavington area are under 24-hour guard “by a small brigade” of armed police officers, the report said.

“At their Lavington offices, the executives are running a near self-sustaining operation that is in very little need of local staff or locally produced goods, having shipped in almost anyone and anything they need to run their growing empire.”

The executives are being housed in lavish apartments and are driven out around “in top of the range tinted vehicles. There are also several bullet proof vehicles among them,” the report said.

The Sunday Standard also noted that “Despite the huge staff deployment, the Chinese operator is yet to put in place a sufficient strategy to deal with medical emergencies that have caused death on the train. Last week, a diabetic passenger died on board the Madaraka Express.”