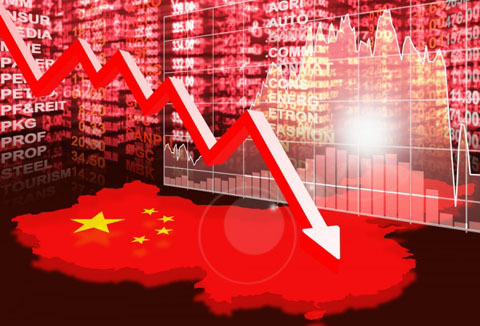 But its trade surplus with the U.S. doesn’t tell the entire story. The communist country’s “current-account balance paints a different picture.

China’s all-powerful financial machine, which has made much of the world uneasy, may prove to be a paper tiger,” analyst Yoichi Takita wrote for Nikkei Asian Review on May 13.

“In addition to a country’s imports and exports of goods, the current account also measures its trade of services and international transfers of capital,” Takita wrote.

“China’s current-account surplus has been shrinking rapidly, to less than $50 billion in 2018 from more than $300 billion in 2015. It is expected to continue trending downward.”

According to the International Monetary Fund, Beijing’s account surplus will fall to about $40 billion in 2020 and drop to about $20 billion in 2021. China is projected to post a current-account deficit of over $6 billion in 2022 “and keep bleeding red ink in the following years,” Takita noted.

While China’s surplus in goods trading is currently around $400 billion, its deficit in services trading has grown to roughly $300 billion.

“One big factor behind this trend is shopping sprees by Chinese tourists in other countries,” Takita noted. “Their spending at stores abroad is counted as Chinese imports.”

China may also be amassing losses on investments in foreign-exchange reserves. “About 60 percent of China’s foreign reserves are invested in stable foreign assets like U.S., European and Japanese government bonds. But it is not known where the rest is parked,” Takita wrote.

The Chinese government does not offer detailed information about its loans to and investments in emerging countries.

But Johns Hopkins University’s China-Africa Research Initiative has noted that Beijing lent a total of $143 billion to African countries between 2000 and 2017. Additionally, Boston University estimates that China has extended $140 billion in loans to Latin American and Caribbean countries since 2005.

In April, China hosted a summit to promote the Belt and Road infrastructure investment initiative, one of supreme leader Xi Jinping’s signature policies.

“While boasting about $64 billion worth of new deals struck by companies participating in the initiative, Xi stressed the importance of the projects’ sustainability. The remarks reflect Beijing’s growing concern about the possibility that unsustainable projects could leave it with a mountain of bad assets,” Takita wrote.

There are also signs that Chinese banks are facing problems financing overseas loans.

The state-owned Bank of China had $70 billion more dollar-denominated liabilities than dollar assets at the end of 2018.

According to the Wall Street Journal, while the government wants to make China a major supplier of funds overseas, there is little appetite among potential borrowers for loans in yuan. Most of the development projects in the Belt and Road initiative have been financed in dollars.

“If Chinese banks run short of dollars, the government has no choice but finance the projects with money from its foreign reserves,” Takita noted.

China’s current situation is “reminiscent of Japan in the 1990s, when wildly inflated asset bubbles were in the process of collapsing,” Takita wrote.

“During the bubble years, Japanese direct investment in overseas assets, most notably real estate in the U.S. and other countries, skyrocketed. But a large portion of these investments eventually went sour.”