The 100 FBI agents and six attorneys who investigated Hillary Clinton’s mishandling of classified information agreed that the former secretary of state should have been prosecuted and, at the very least, should have had her security clearance pulled. 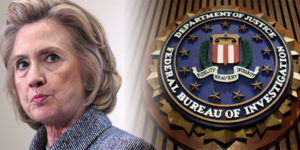 “It was unanimous that we all wanted her security clearance yanked,” FBI officials told Fox News on Oct. 12.

“It is safe to say the vast majority felt she should be prosecuted,” one source said. “We were floored while listening to the FBI briefing because (FBI Director James) Comey laid it all out, and then said ‘but we are doing nothing,’ which made no sense to us.”

One source closely involved in the case said agents and attorneys in the FBI were unanimously opposed to the decision not to indict Clinton.

The announcement in July that the FBI would not recommend an indictment reportedly disgusted the team of investigators involved in the case.

“No trial level attorney agreed, no agent working the case agreed, with the decision not to prosecute – it was a top-down decision,” the source said.