The House Freedom Caucus is calling on President Donald Trump to veto the spending bill that kicks border wall funding to when Rep. Nancy Pelosi becomes the likely next Speaker of the House.

“I rise to encourage my colleagues to stay in the fight to have the president deliver on a promise,” North Carolina Republican Rep. Mark Meadows, House Freedom Caucus chairman, said in a speech on the House floor on Dec. 19. 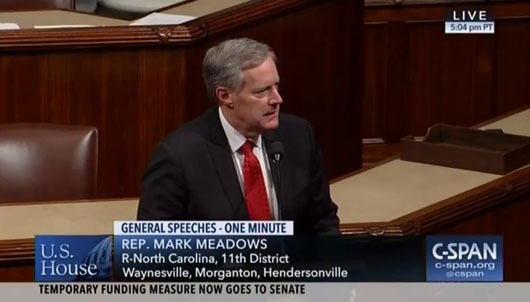 Senate Majority Leader Mitch McConnell, Kentucky Republican, said on Dec. 19 that he will sponsor a continuing resolution (CR) that would fund the government through Feb. 8.

Without a resolution, more than 800,000 government workers could be furloughed or sent to work without pay.

Democrats assume control of the House in January, and Pelosi has said there would be no funding for the border wall.

Trump tweeted on Dec. 19: “In our Country, so much money has been poured down the drain, for so many years, but when it comes to Border Security and the Military, the Democrats fight to the death. We won on the Military, which is being completely rebuilt. One way or the other, we will win on the Wall!”

Rep. Jim Jordan, Ohio Republican and a co-founder of the Freedom Caucus, slammed House Republican and Democrat leadership for fooling the American people into thinking that they would fund Trump’s proposed border wall.

“Everyone knows the line ‘fool me once shame on you, fool me twice, shame on me,’” Jordan said. “The new line should be, ‘fool the American people four times, shame on Congress.”

Jordan continued, “Now they’re talking about kicking it to Feb. 8, you got to be kidding me. Feb. 8? When Nancy Pelosi is Speaker? Four different times we promised something and then kicked the can down the road.”

While lawmakers kicked the can down the road on border wall funding, a U.S. veteran has vowed to raise $1 billion in a Go Fund Me campaign to help pay for the wall.

Brian Kolfage, a triple amputee veteran and Purple Heart recipient raised more than $1 million in just the first few days of the campaign.

Kolfage wrote on the Go Fund Me page:

“Like a  majority of those American citizens who voted to elect President Donald J Trump, we voted for him to Make America Great Again. President Trump’s main campaign promise was to BUILD THE WALL. And as he’s followed through on just about every promise so far, this wall project needs to be completed still.

“As a veteran who has given so much, 3 limbs, I feel deeply invested to this nation to ensure future generations have everything we have today. Too many Americans have been murdered by illegal aliens and too many illegals are taking advantage of  the United States taxpayers with no means of ever contributing to our society.

“I have grandparents who immigrated to America legally, they did it the correct way and it’s time we uphold our laws, and get this wall BUILT! It’s up to Americans to help out and pitch in to get this project rolling.

“If the 63 million people who voted for Trump each pledge $80, we can build the wall. That equates to roughly 5 Billion Dollars, even if we get half, that’s half the wall. We can do this.”