Texas Democrat Rep. Al Green sat on the steps of the U.S. Capitol on March 4 in an act of defiance and bravery against an impending insurrection.

Just ask him, he’ll tell you that’s what happened.

So will the sheep in the corporate media. Take a closer look (see below) and one would start laughing.

So what was supposed to go down on March 4?

According to Democrats and their propaganda arm known as the corporate media, QAnon saw that date as the real Inauguration Day and planned an all-out siege on the Capitol.

House Speaker Nancy Pelosi canceled voting Thursday due to the QAnon insurrection that was about to engulf D.C.

Canceling the vote allowed Green to courageously sit on the steps of the Capitol. Take that all you QAnon insurrectionists.

Just look at Green in all his defiant glory:

But, then, there’s this: 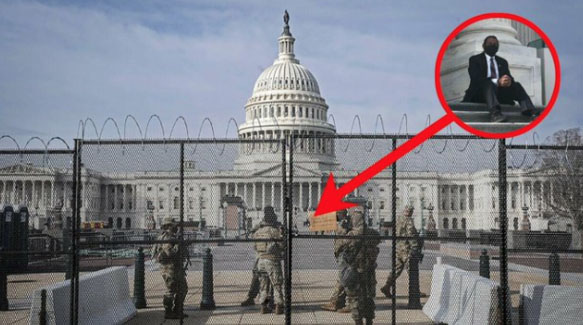 “It was all balderdash, a PsyOp aimed at delegitimizing support for Trump or questioning the integrity of the presidential election,” American Thinker columnist Thomas Lifson noted.

Still, Green’s stunt “was taken with deadpan seriousness by much of the media,” Lifson noted.

Rep. Al Green (D-Texas) is sending a message to QAnon and right-wing extremist threats by sitting on the Capitol steps on Thursday, the date authorities warned militia groups were potentially planning another breach of the building.

“I want to make a statement to let people know, those who would threaten those of us who cherish this freedom that we have here that we refuse to allow those threats to negate our freedom,” he told The Hill.

Green himself touted his bravery, tweeting: “I love my country and believe that freedom is not free. Others have made great sacrifices for the freedoms I enjoy. I refuse to surrender our nation’s Capitol to those who would abridge my freedom. Hence, as a matter of personal principle, I will be in the Capitol complex today.”

Which of the above two photos do you think the corporate media and Big Tech will allow the American public to see?

As Lifson noted, “Ninety percent–plus of the population will never see the broader picture. The propagandists control what most people see, and they are all too effective in their theatrics.”

In fact, any news outlet that sent one reporter to the Capitol on March 4 would have outnumbered the Qanon insurgents attacking the building.

It took five stenographers for Jeff Bezos’s once-formidable organization to write an article about how the so-called “threat” turned out to be “a mirage.”

The entire Qanon inauguration tale was just that, a fictional story pushed by real clowns.